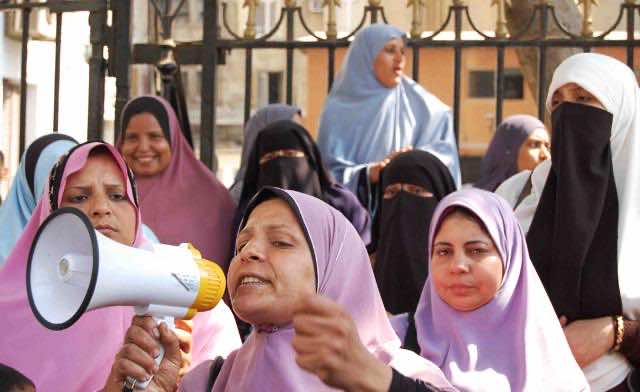 An Egyptian court ordered on Tuesday that forced virginity tests be stopped on female detainees in military prisons.

The case was filed by Samira Ibrahim, a woman who said the army forced her to undergo a virginity test in April after she was arrested during a protest in Cairo’s Tahrir Square.

Human rights organizations say that there have been many other such tests by the military.

“The court orders that the execution of the procedure of virginity tests on girls inside military prisons be stopped,” said judge Aly Fekry, head of Cairo Administrative court. Hundreds of activists inside the courtroom cheered after the ruling was read out.

Amnesty requests for investigation were ignored

In March after news reports in which women admitted to being tortured during detentions, Amnesty International gathered the testimonies of women protesters subjected to forced “virginity tests” and wrote to SCAF requesting an investigation.

They did not receive any response.

The general justified the practice by saying that the women “were not like your daughter or mine. These were girls who had camped out in tents with male protesters.”

Amnesty International issued a statement after the interview saying, “This admission is an utterly perverse justification of a degrading form of abuse. The women were subjected to nothing less than torture.

“The Egyptian authorities must condemn these discriminatory, abusive and insulting attitudes which have been used to justify torture of women protesters, and which are clearly present at the highest levels,” it said.

The general also told CNN that the reason for the tests was “[w]e didn’t want them to say we had sexually assaulted or raped them, so we wanted to prove that they weren’t virgins in the first place.”

Amnesty hit back in its press release by saying: “This general’s implication that only virgins can be victims of rape is a long-discredited sexist attitude and legal absurdity. When determining a case of rape, it is irrelevant whether or not the victim is a virgin.”

The woman who fought for justice has emerged as a hero for Egyptians, men and women.

Ibrahim was arrested by military police on March 9 during a sit-in in Tahrir Square with 17 other women. Many of them were subjected to torture during their detention, as well as forced virginity tests inside the army prison. Ibrahim chose to pursue legal action against her abusers.

Since then, the case has been dragged out with Ibrahim telling the Global Post Online after a postponement of the verdict on Dec 1: “The state will keep dragging this out. They want me to give up and drop the case.”

During this time, however, Ibrahim gained much support. She saw it when she came to Cairo on Dec. 1 to attend the hearing and found that a march had been organized by supporters who wanted to show their admiration for her stance against the military.

She told The Global Post that the biggest surprise was finding a graffitti mural of herself with the words “respect” underneath.

“At first, I just saw ‘Samira Ibrahim’ written on the wall, and I immediately thought there must be someone else who has the same name as me,” she said to the newspaper. “Then I saw the rest of the mural and I could not believe my eyes.”