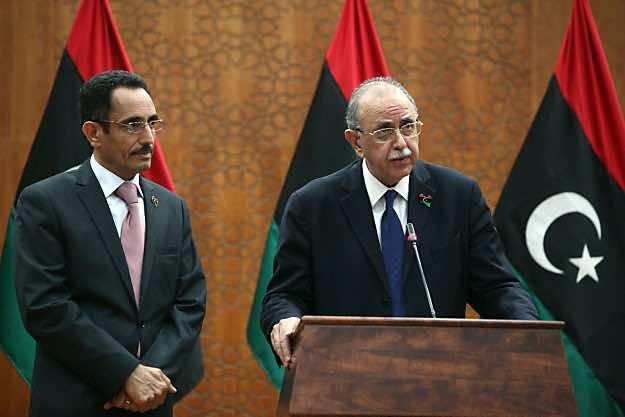 Libya’s rulers are struggling to deal with  thousands of civilian fighters who helped oust Moamer Kadhafi and remain organised in armed brigades but now want key roles in the new government.

Many of these young men left school or their jobs to fight against Kadhafi’s dictatorship and are still providing security in parts of the country, including at key sites like Tripoli’s international airport.

On Sunday, Libya’s ministers of defence, interior and planning detailed a scheme to register these former rebels, hoping to integrate many of them into the military or police.

Those who choose to not join the security services could be trained in other fields, possibly outside Libya, or simply return to their school or set up businesses backed with state aid.

Interior Minister Fawzi Abdelali said the plan was not a reward for helping topple a reviled autocrat, but stressed that these fighters are needed to fill “large gaps” within the new government’s security apparatus.

But on Monday, representatives of the Union of Libyan Thwars (revolutionaries), which claims to represent 70 percent of these ex-rebels, stepped up their demands by calling on the ruling National Transitional Council (NTC) to grant them 40 percent of its seats.

The thwars “are the symbol of this revolution” and “are those with a real force on the ground”, said Fraj al-Soueihli from Misrata, the port city east of Tripoli that was besieged by Kadhafi’s men, as he affirmed the “loyalty” of the ex-rebels to the state and to the government.

The authorities, facing a barrage of demands from various groups following Kadhafi’s downfall, have so far proved reluctant to tackle the thorny issue of the militias, some of whom are heavily armed and do not intend to give up the gains they achieved during the revolution.

Some former rebels have left Tripoli as desired by the capital’s exasperated residents, but many are guarding key installations, like Tripoli’s international airport, which is controlled by the Zintan brigade, named after a town southwest of Tripoli.

One the Zintan’s brigade’s commanders was appointed as defence minister in the interim government of Prime Minister Abdel Rahim al-Kib.

The militias have understood Tripoli residents’ desire for peace and their members leave their camps only when needed, said Soueihli.

But, he added, they will give up their weapons “when the state is really in charge”, a position shared by most of the brigades.

The prime minister too maintains that the militias’ issue is “much more complex than it seems.”

But several people, including some officers from the old army, are impatient with the slow pace at which security is being restored in the country and want added authority so the militias can be definitively be disarmed.

“The NTC is afraid of the thwars and does not want to exclude them as they have power,” said Colonel Bashir al-Oueidat who wants the appointment of a chief of staff for the army as soon as possible in order to rebuild the national army.

The issue of appointing the new chief is to be settled on January 1 by a committee of 25 officers chosen by the thwars at the request of the NTC.

But the committee’s decision has to be accepted by all militia groups, some of which want to see the army led by one of their own.

The former rebels remain divided, with disputes erupting into the open last week at the conference of the union of thwars.

Some complained of not being officially invited, others accused participants of being “opportunistic,” and some came to blows when members of a brigade arrived with their weapons in violations of the regulations.