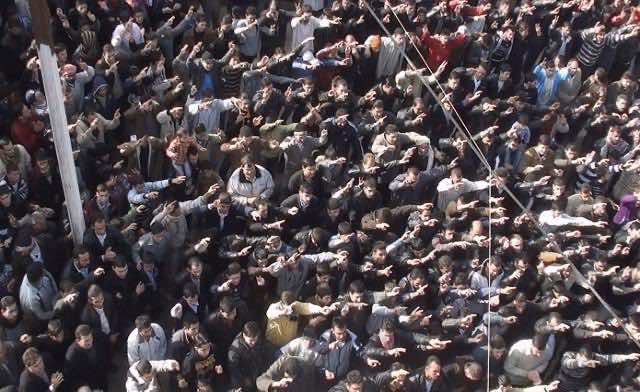 Syrian police used tear gas to disperse some 70,000 people who took to the streets of Homs on Tuesday as Arab observers visited there a day after dozens of people died in the crackdown on dissent.

“More than 70,000 demonstrators tried to enter Al-Saa square in the center of the city of Homs, then security agents used tear gas to disperse them,” said the Britain-based Syrian Observatory for Human Rights.

At the same time, some demonstrators were fired on with live ammunition as they made their way to the square, and four were wounded, one seriously.

The Observatory said separate demonstrations were held elsewhere in the city, aimed at “exposing the ill practices and crimes of the regime.”

Before joining the march on Al-Saa square, tens of thousands staged a sit-in in the Al-Khalidiyeh neighbourhood, according to the Observatory, which also reported demonstrations in the districts of Bab Dreib and Jub al-Jandali.

The protests come as Arab League observers visited the flashpoint central city to monitor a deal to end a nine-month crackdown on anti-regime protests.

Following the killings of a reported 34 civilians in Homs’ Baba Amro district on Monday, residents held a funeral in nearby Kefer Ayia for some of those who died and were fired on by security services, the Observatory said.

Activists said the military pulled its tanks back from one district ahead of the Arab team’s arrival, only to hide them inside government zones from which they could be redeployed within minutes.

Meanwhile, SANA state news agency reported that saboteurs blew up a gas pipeline in Homs province, where Syria’s regime has been trying for months to crush dissent and mutinous soldiers.

Protesters appeared to have been emboldened by the presence of the observers, headed by veteran Sudanese military intelligence General Mohammed Ahmed Mustafa al-Dabi.

“Till now, they have been very cooperative,” Dabi told AFP, speaking of the authorities by telephone before holding talks with governor Ghassan Abdel Al.

A video posted by the Observatory on YouTube showed residents of Baba Amro pleading with Dabi to go in and see the devastation.

“The delegation of observers entered Baba Amro, accompanied by people from the government, but did not meet the residents,” Observatory chief Rami Abdel Rahman told AFP.

Syria’s Dunia television said the observers also visited the Bab Sebaa district, where they “assessed the damage carried out by terrorist groups.”

“They also met with relatives of martyrs and a person who had been abducted” by these groups, said Dunia, which is close to the regime, adding that many people decried the “conspiracy against Syria” to the monitors.

The observers are also due to travel to the protest hubs of Hama, near Homs, and Idlib in the northwest, close to the border with Turkey, the television added, without saying when.

Ahead of the observers’ arrival, the army pulled back heavy armor from Baba Amro, scene of much of the violence, the Observatory said.

The Observatory said the tanks and troop carriers had “repositioned inside the government centers in Baba Amro, Al-Inshaatt and Brazil Street in Homs.”

It cited an activist as saying on its Facebook page that “it only takes over five minutes” for the vehicles to return, and said the move was part of the regime’s “deception”

France warned Syria against attempts at concealment or manipulation.

“So far the Damascus regime has spared no effort to disguise the reality” of repression in Syria, foreign ministry spokesman Bernard Valero said.

“The international community will be particularly watchful for any attempt at concealment or manipulation that the Damascus regime might try,” he said.

“We call for vigilance and ask that the Arab League observers be allowed to carry out their mission without hindrance,” Valero said.

“The observers must have access to the entire city and be able to clearly and independently establish what the situation is and bring about an end to the violence,” he said.

The mission is part of an Arab plan endorsed by Syria on November 2 that calls for the withdrawal of security forces from towns and residential districts, a halt to violence against civilians and the release of detainees.

The United Nations says more than 5,000 people have lost their lives.

Seven more persons were killed Tuesday by security force gunfire, including two in Homs province, one in Idleb, two in Deraa and two others in Douma, near Damascus, the Observatory said.

The leader of opposition umbrella group, the Syrian National Council, Burhan Ghaliun, urged UN and Arab League intervention “to put an end to this tragedy,” and called on the UN Security Council to “adopt the Arab League’s plan and ensure that it is applied.”

“It is better if the UN Security Council takes this (Arab League) plan, adopts and provides the means for its application,” Ghaliun said on Monday. “That would give it more force.”

The Arab “plan to defuse the crisis is a good plan, but I do not believe the Arab League really has the means” to enforce it, he said.

Syrian foreign ministry spokesman Jihad Makdisi said the observer “mission has freedom of movement in line with the protocol” Syria signed with the Arab League.

Under that deal, the observers are banned from sensitive military sites.

Syrian Foreign Minister Walid Muallem has said he expects the observers to vindicate his government’s contention that “armed terrorists” are behind the violence.

In other developments, blogger Tal al-Mallouhi, sentenced to five years in prison in late 2010 for “passing information to a foreign state,” went on a hunger strike on Tuesday to demand her release, the Syrian Centre for Media and Freedom of Expression reported.