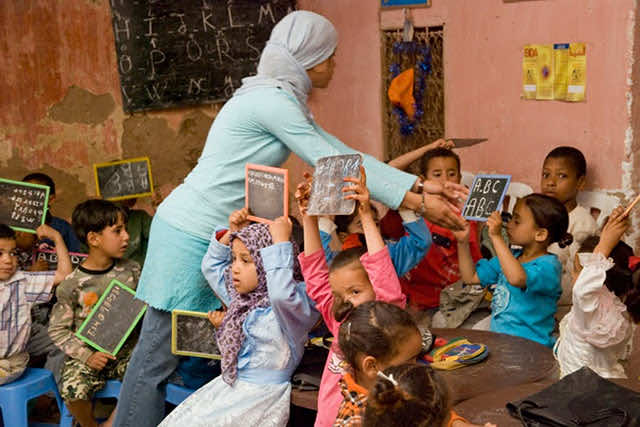 Sidi Ifni – Now that I have recently celebrated my twenty-sixth birthday, I can not help reminiscing about my childhood days. Though still young, I feel that I am getting older day after day. I might attribute this strange feeling to the remarkable changes I have undergone during all these years. In reality, I am no longer the person I used to be fourteen years ago, nor was I then the person I am today. Completely different personalities, actually!

It was in 1994 when I started school; I was seven then. The first thing I was amazed by when I first entered my class were the posters on the classroom wall. I would say that they sum up my past life and the one I am currently leading. I quite vividly remember some of the posters. Whenever my teacher asked us to write down the lesson, from time to time I cast glances at the pictures in the posters. I so much appreciated them and beheld them with awe.

The first one to the right was quite gloomy-looking. In it, there was a red bus with passengers inside and a new pupil outside holding a satchel on his back hurrying up to the bus and talking to the driver. At the time, I had no idea what a bus was for, nor did I know why the new pupil appeared to be in a rush. Suffice it to say, I enjoyed the scene. Like any of my peers, I was a fair pupil. I raised my hand when the teacher asked us simple questions, but at other times I just kept staring at the poster in admiration.

Only later on did I know that the pupil in the poster would be me, no one else, for I was the only one in my village to pursue my studies. Owing to poverty, some of my classmates traveled to different cities to work and help their family. I wanted to do the same, but no one offered me work. Others traveled abroad because they were born with a silver spoon in their mouth. I felt so sad to see my fellow classmates leaving me one by one. After a certain period of time, I began secondary school and took the bus with students from other villages.

In the second poster to the left, there was a city made of glass with different lights ranging from green to red. Many times I had heard of the city, but at the time I had never visited one. Though I was born in Tangiers, I don’t remember it well to know what it was like. Meanwhile, my mother recounted to me the important places, streets and markets there. At first, I thought that once I graduated, I would work in the village like any other bricklayer or mason. That is why I was not too interested in visiting a city.

As soon as I earned my High School Diploma , my family moved to El Jadida. Only then did I know that the city in the picture was like merely being in El Jadida. There, I spent indelible moments, studied at the faculty, graduated from it, and became a teacher at the age of twenty-two. Notwithstanding, I still try to look back on the other posters on the class wall, racking my brains to remember them all, but in vain. I have looked forward to being able to recall the posters depicting the positions of teacher and writer, but I fail to remember them in any detail.

Last summer, I paid the school a visit, peered into the broken windows for a while, and to my utter dismay, found that all the posters had long been peeled off from the wall and that new ones had supplanted them. I became depressed and while clenching the bars of the window out of fury, someone patted my shoulder. I looked around only to find a ten-year-old boy smiling at me and asking me about the posters.

“Hi Sir! What do you think of the posters we drew this year?”

I went home immediately and from that time onwards, I felt happier than before simply because there was still a student who took such a keen interest in the posters that hung on the classroom wall. I am certain that one day, sooner or later, this ten-year-old pupil will be in need of them so as to contemplate how he once lived.