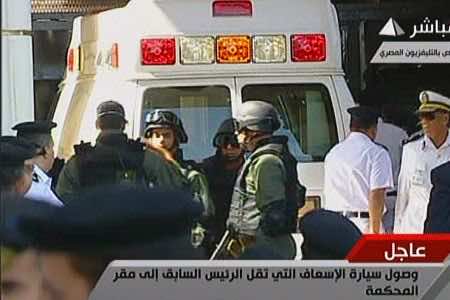 Ousted Egyptian president Hosni Mubarak was on Wednesday transported by ambulance to court, where his murder trial resumes after a three-month pause.

State television showed the ailing former strongman, who was dressed in white and covered in a blanket, being wheeled out of an ambulance on a stretcher.

Mubarak who is being in custody in a Cairo military hospital, is accused of involvement in the killings of some 850 people who died during protests that overthrew him in February.

Around 5,000 policemen were deployed to secure the trial held at a police academy in the outskirts of Cairo.

A few pro-Mubarak supporters held banners of the former president, while families of the victims that died in protests carried pictures of their deceased relatives, an AFP correspondent said.

If found guilty, Mubarak, 83, could face the death penalty.