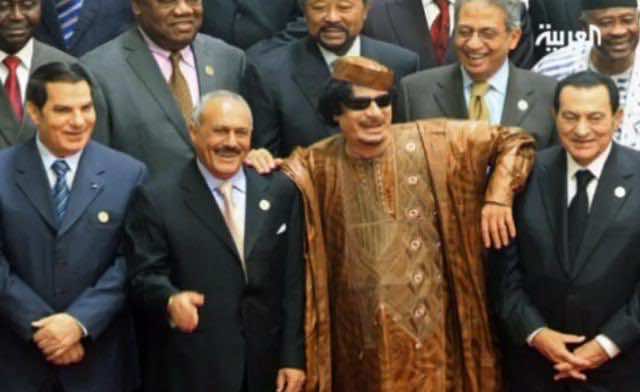 Arabs will never forget 2011, not only because it is the year many of them ousted their repressive regimes or began the process of doing so, but also because it is the year in which their heads of state gave the strangest speeches to their people, whether to curry favor, gain sympathy or threaten retaliation.

The speeches differ in purpose and content, but one thing is common between them: They all came as a reaction to the people’s unexpected decision to demand that their leaders step down.

With Tunisia being the birthplace of the Arab Spring, former Tunisian President Zein al-Abedin bin Ali was naturally the first to give a speech to revolutionaries.

In fact, Bin Ali gave three speeches throughout the 20 days of the Jasmine Revolution, but one single sentence became the most famous and is expected to be immortalized in history books.

“I get you,” said Bin Ali in an attempt to convince Tunisians that he had managed to understand their demands and that he would work on implementing the reforms they were protesting for.

Like Bin Ali, former Egyptian president Hosni Mubarak also gave three speeches, also trying to give Egyptians the impression that he “got” them, but in a different way.

“I have no problem at all with listening to the youth in my country and to respond to their demands,” he said.

Another memorable part was the one where Mubarak vowed that he is “not after power” and that he was not “intending to run for another term anyway.”

Because both Bin Ali and Mubarak stepped down after their third speeches, everyone waited eagerly after late Libyan leader Muammar Gaddafi gave the first two speeches. They were mistaken, for the Colonel gave at least 10 speeches during the Libyan revolution, some extraordinarily long and others short, some in person and others on the phone. And as always, he gave colorful speeches.

One of the speeches that came in the beginning of the revolution included the most memorable of his sayings, and has been the subject of countless jokes ever since.

“We will march towards them in millions to purge Libya inch by inch, house by house, alley by alley,” shouted Gaddafi as he vowed to retaliate against the revolutionaries and crush all sorts of dissent. He did do his best to prove that he meant what he said.

Besides the number of speeches, Gaddafi also beat Bin Ali and Mubarak as far as the length of each speech. While each of the Tunisian and Egyptian leaders’ speeches did not exceed 13 minutes, Gaddafi’s first speech ran for 76 minutes.

Syria’s Bashar al-Assad does not seem to be so much into speeches, for since the anti-regime protests started he has given only gave two speeches; one lasted for 54 minutes and the other 75 minutes. Both speeches were interrupted by applause from the audience, 44 times for the first and 20 times for the second.

As for Yemeni President Ali Abdullah Saleh, contradiction was the main characteristic; one time he would give the impression that he wanted to step down, and then he would seem to be holding on to power.

He was also distinguished for giving speeches on Fridays, making sure he spoke at the same time as the protests calling for his ouster were at their peak.