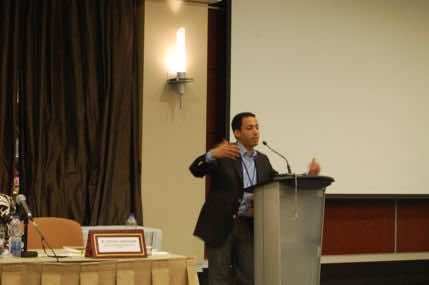 The Moroccan Diaspora in the United States is still a new community in the making, mostly established in the tri-state area (New York, New Jersey, Connecticut) but also in Virginia, Massachusetts, Florida and Texas. Even if this community is composed in its majority of blue-collar workers, it does have many professionals, few entrepreneurs, artists, academics and intellectuals.

Younes Abouyoub, a political scientist/sociologist at Columbia University and consultant to the United Nations, is among those Moroccans who Morocco World News is proud to introduce to its readership, as a recognition of his intellectual and political achievements so far and many more yet to come.

A native of Casablanca, Younes Abouyoub has studied in the Moroccan public education system until he graduated from Hassan University II in British and North American literature and cultural studies. He subsequently left for Paris to continue his studies at the Sorbonne University, and later on at University of Geneva.

In 2003 he received a scholarship from Columbia University to complete his PhD dissertation in political science. He also has degrees in Geopolitics and Law from the Sorbonne University. His research interests evolve around the sociology of power, issues of governance and democratization, race/ethnicity & class, conflict resolution, sustainable development, and political ecology.

During the two decades that he has spent abroad, living in different countries, France, Switzerland, Kenya, Sudan, Ethiopia and the USA, Younes Abouyoub had the opportunity to discover many cultures and political systems that he studied with interest. He has come to the conclusion that ‘human beings are the same in nature but differ in their circumstances and conditions’. His peregrinations around Africa triggered his interest in questions of economic and human development in the continent, and the historical cultural links between Morocco and numerous other sub-Saharan countries.

In the United States, after studying the Arab-American community and its political activity for years and published a series of studies in Academic journals, he recently embarked on conducting a seminal study on the Moroccan Diaspora in the USA and the impact of the financial crisis on this budding community.

Talking to Morocco World News, he stated that ‘the social integration and political involvement and participation of Moroccans in American politics is paramount if they want to assert their rights as a community, and subsequently participates in advocacy on behalf of the national causes of Morocco and contribute to its economic development’.

Furthermore, he believes that ‘there are no clashes between cultural identities and that identity is necessarily multiple, especially for migrants. As such, Moroccans abroad should claim their rights as citizens in the USA and Morocco alike and partake in the economic/political development of Morocco’.

In his capacity as an Academic and an international consultant, he had numerous appearances on Aljazeera, Russia Today, Al Hurra, France 24, RTM, 2M, Press TV, and American radio networks such WBAI, Afrobeat radio…etc, to discuss the issues of international relations, sustainable development and governance.

Besides his interests in classical music, which he studied first at the Casablanca conservatory then in Paris, he studied documentary film production at he School of Visual Art (SVA) in New York and has participated in the production of short movies such as Tolerance: Bigotry Chokes the Mind (2007), Rocky Must Die (2011), and contributed to documentary films: I Love Hip-Hop In Morocco (2007), Garbage Dreams (2009).

He is in the process of co-producing a documentary on the intellectual legacy of the famous anti-colonial thinker and psychologist Franz Fanon. ‘Audio-visual media is an important tool to reach out to a wider public, probably more so than an academic book can’ argues Mr. Abouyoub, when asked about his interest in documentary filmmaking.

Finally, under the leadership of the Jan Eliason, former Minister of Foreign Affairs of Sweden, and Salem Ahmed Salem, special envoy of the African Union to Sudan, he has been member of the Joint Mediation Support Team of the Darfur peace process, and was a member of the Panel of Expert on Sudan established by the Security Council.