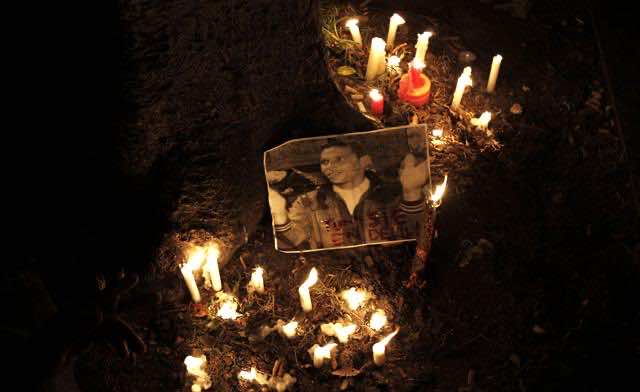 Britain’s The Times newspaper on Wednesday named as person of the year Mohamed Bouazizi, a Tunisian whose self-immolation inspired uprisings that toppled dictators across the Arab world and shook the region’s remaining autocracies.

Bouazizi set himself alight last year after officials confiscated the unemployed 26-year-old’s unlicensed grocery cart, reportedly slapping and insulting him. His desperate act struck a chord with millions of Arabs living with few job prospects or avenues for change under entrenched autocracies.

“The Times today names Mohamed Bouazizi, the street vendor who became the inspiration for the Arab Spring, as its person of the year,” the paper said on its front page. “Bouazizi was no revolutionary, yet his lonely protest served as the catalyst for a wave of revolts that have transformed the Middle East.”

Bouazizi’s death from his wounds in January prompted protests across Tunisia, forcing autocratic President Zine Al-Abidine Ben Ali to flee the country. Soon afterwards, millions took to the streets in Egypt, Libya, Syria and elsewhere to protest against repression, corruption, poverty and joblessness.

The uprisings unseated despots in Libya, Egypt and Yemen as well as Tunisia, while Syrian leader Bashar al-Assad’s writ is disintegrating and other authoritarian rulers in the region are eyeing the tide of public anger with nervousness.

Tunisia has since elected new leaders through peaceful democratic elections.

In an October interview with Reuters, Bouazizi’s mother Manoubia urged the new leaders to honour her son’s sacrifice by helping poor people like him.

Nothing would have happened if my son had not reacted against voicelessness and a lack of respect,” she said.

“But I hope the people who are going to govern will be able to keep this message in mind and give consideration to all Tunisians, including the poor.”