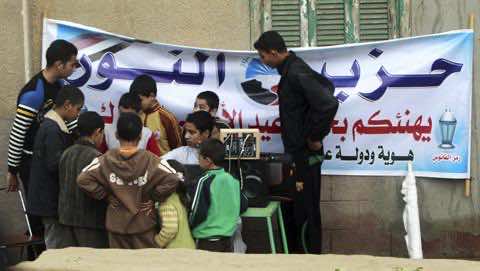 Egypt’s powerful Muslim Brotherhood said on Wednesday it would protect churches during Coptic Christmas in January in a bid to prevent deadly attacks on Christian places of worship.

“We have decided to form Muslim Brotherhood committees to protect the churches so that the hands of sin do not ruin the festivities like they did several times under the old regime,” the group said in a statement.

It urged the ruling military council, which took power when a popular uprising ousted Hosni Mubarak in February, to help secure the churches.

“We call on the Supreme Council of the Armed Forces and the police to protect the churches in the same way they protected polling stations during the elections,” the Brotherhood said.

Last year, more than 20 people were killed in an apparent suicide bombing as hundreds of worshippers were leaving the Al-Qidissin (The Saints) church in the Mediterranean city of Alexandria after a New Year’s eve mass.

In January 2010, six Copts were shot dead as they emerged from a Coptic Christmas Eve mass. A Muslim security guard was also killed in the shooting.

Coptic Christians, who make up around 10 percent of Egypt’s 82 million population, have been the target of frequent attacks and complain of systematic discrimination.

The Middle East’s largest Christian community has also become increasingly concerned about the rise of Islamists’ political influence since the uprising that toppled Mubarak.

The Muslim Brotherhood’s political arm, the Freedom and Justice Party, has so far emerged as the front-runner in the first post-revolution legislative elections.

The largest party belonging to the more hardline Salafi movements, Al-Nur, has come a close runner-up in the first two rounds of polling.