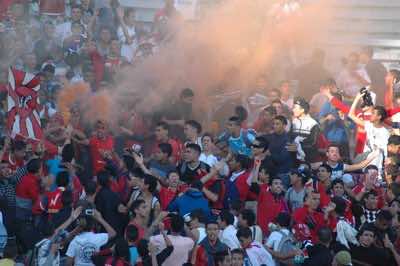 Fourteen people were arrested after violence erupted during a derby game between CODM and MAS Fez in the Moroccan city of Meknes on Tuesday evening, a police source announced on Wednesday.

“These people accused of violence against others will on Thursday go before the court in Meknes, which will decide their fate,” said the source.

The derby match was stopped by the referee in the 52nd minute, with hosts CODM leading 1-0, after MAS player Abdelmoula Berrabeh was struck by a missile thrown by supporters.

MAS coach Rachid Taoussi also claimed to have been hit by a bottle.

The Royal Moroccan Football Federation has announced that it will open an investigation into the violence.