Casablanca - If you are a faithful viewer of Moroccan channels and especially 2M, you can’t possibly miss the New Year’s Eve show teaser.  In fact, the glittering show trailer has been broadcast for two weeks. The viewer is amazed to see the  Lebanese star Yara performing on 2M stage or the living  legend Cheb Khaled singing on the show wearing that singular smirk on his face. The teaser reveals more guest stars in different categories ranging from modern Arab music to Amazigh folklore. 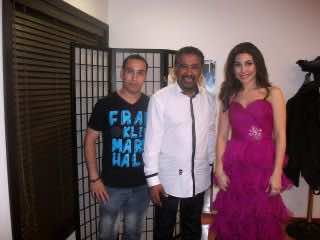 By
Loubna Flah
-
Loubna FLAH is a Moroccan national.
Dec 29, 2011
Spread the love

Casablanca – If you are a faithful viewer of Moroccan channels and especially 2M, you can’t possibly miss the New Year’s Eve show teaser.  In fact, the glittering show trailer has been broadcast for two weeks. The viewer is amazed to see the  Lebanese star Yara performing on 2M stage or the living  legend Cheb Khaled singing on the show wearing that singular smirk on his face. The teaser reveals more guest stars in different categories ranging from modern Arab music to Amazigh folklore.

For Moroccan channels, the New Year Eve’s show has become a tradition reiterated each year. To the viewers’ surprise, the music show has thrived lately especially in 2M where some singers have become so regular that they are mistaken for TV presenters. Parallel to the festive dimension attributed to this event, the exhilarating SMS contest tries to appeal to wider audiences.

The New Year eve celebrations are exclusive occasions for TV producers to show a compilation of “Best of” series. Viewers are exposed to the presenters’ slips of the tongue and off screen tickling jokes. Seemingly, the last days of the civil year are the “sum it all” moments.  In western culture, New Year’s Eve is time for redemption and self accountability. It is also the right moment to make new resolutions, and to sketch new plans. While some will reconsider their spending habits, others will pledge more commitment to their weight loss diet.

The Moroccan media in general tends to mobilize their staff to cover a wide range of issues relevant to the event. Magazines will give you tips on how to choose the New Year’s gift for your beloved. The gastronomy column will present the recipes of a mouthwatering creamy cake. The media of highest caliber will publish a list of the most affluent or unaffluent people in the past year. The end of the civil year seems to be a rupture with a revolved period and the conclusion of a new contract.

In our pursuit of happiness, we go a long way, and it is clamorous to halt for a short time to weigh the ups and downs of our journey. One needs to ponder manifold aspects of life from a farther and different angle, as Victor Hugo says “who watches from above, has a good view and who watches from a far, has a just view”. It is noteworthy that celebrations are inherent in human social behavior.  Since old times, both women and men attempted to tame the wild factor of time in order to tailor its evasive nature to their convenience. Thus, celebrations had always punctuated the course of life along with the alternation of days and nights and the orderly continuation of seasons. Celebrations are a far cry from being fortuitous events. Despite their recreational aspect, festivities serve a specific purpose in society. National celebrations for instance are liable to consolidate national unity. Religious celebrations offer believers the chance to reinvigorate their faith, and to strengthen ties within their community. Celebrations have also the merit to dissipate culminating discontent in societies. Thus, festive occasions can be used as a stress relief strategy or as a periodic distraction from daily afflictions.

For many Moroccans, the new civil year bears no religious or social significance. It has rather a mere symbolic value, since it marks the closure of a period with all its joys and misfortunes.

Meryem, a postgraduate student at the University of Hassan II in Casablanca believes that “the end of the year is an opportunity to revisit my life and to ponder whether I am on the right path. I usually share my best wishes with my family and friends, though I don’t follow any ritual during New Year’s Eve.”

Yet, the media coverage of the New Year celebrations magnifies the significance of the event for Moroccans. The magnitude of media coverage, the staff and the resources mobilized for this event in Moroccan channels can be misleading as to its real significance. While the civil year eve enjoys extensive coverage in Moroccan channels, the new Islamic year remains poorly covered and largely unnoticed.  Some channels make the effort of broadcasting spiritual music concerts or a movie about the Prophet’s (Peace Be Upon Him) journey to Medina, but this tradition is declining in Moroccan media. On the other hand, music shows celebrating the New Year’s Eve hits the screen starting from mid December.

Intissar, a postgraduate student at Al Akhawayn University in Yfran, considers that “there is a discrepancy in the coverage of the Islamic and the civil New Year”. She believes that the former is less covered. Nevertheless, she ascribes this inequality to the fact that “the Islamic tradition does not proclaim the celebration of the Hegira as a custom.”

On the other hand, the portrayal of the New Civil Year festivities does not echo the perception of the “common” Moroccan man and woman.  This mismatch in perspectives prompts one to question the correlation between the Moroccan media and the Moroccan viewers’ aspirations. In other words, do these programs align with Moroccan concerns and expectations?  Truth be told, many programs seem to address a “gentry” lifestyle rather than that of the masses’. This approach leaves the ordinary citizen alienated.

Now that the Party of Justice and Development (PJD) is officially entrusted with the ministry of Culture and Communication, can Moroccan viewers expect a substantial adaptive effort of the Moroccan media to their concerns? Can Moroccan channels follow a rational approach in their expenses, especially, since Moroccan viewers pay for programs through taxes in their electricity bill? As the old British adverb goes “we’ll wait and see”. But meanwhile, best wishes for the New Year 2012.