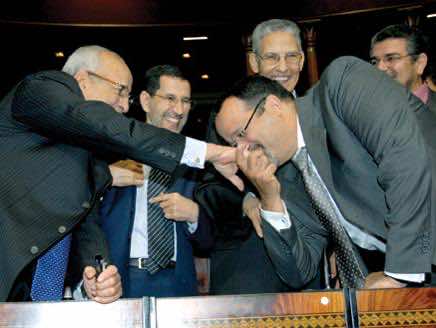 Fez – The Moroccan parliament has always been a matter of controversy to the public. One phenomenon that has intrigued much debate is Moroccan families serving in parliament.

The laws of Moroccan politics do not prohibit family members from being in the same political parties and even under the same dome of the parliament, but this growing phenomenon deserves to be stopped for the moment.

It should be noted that the 395 members of the Moroccan parliament met for the first time after the last legislative elections on Monday, December 19, to elect a new Chairmen of the House of Representatives Karim Ghellab, succeeding Abdel Wahed Radi, leader of the Union of Socialist Forces Party, which is now in the opposition.

It was interesting to see Moroccan families under the dome of the parliament, including the MP Abdel Hadi Khairat from the Socialist Union Party sitting next to his wife Jamila Yemlahi, who won legislative elections as the last candidature within the national list for women, as well as his brother who serves in the Board of Advisors, which is the second chamber of the parliament.

The prominent Ali Qayouh al-Qutb, of the Istiqlal Party ,was joined by his three children Ismail, Abdsamad and Zainab Qayouh. The latter is a businesswoman who won the second rank in the national list for women for her party. The Qayuh Family is the “largest” family in parliament.

The famous businessman Miloud al-Chaibi, the oldest Moroccan MP, was joined by his son Faouzi al-Chaibi. At the same time, the MP Hamid Chabat from the Istiqlal Party succeeded in appending his wife Fatima Tariq to the parliament after his son Naoufal failed to reserve his seat in Taza.

These are just some examples of the families that meet not only at home, but in parliament as well; a parliament that might start to have a distinctive home-like feel where the MPs are each other’s fathers, husbands, wives, sons, daughters or relatives in general.