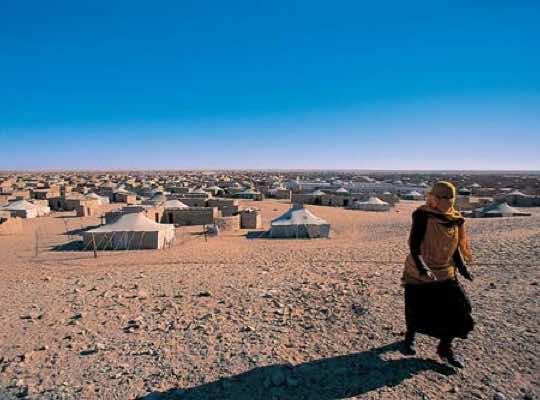 To Abdel Aziz: “For whom are you going to recount your lies?”

Among the famous and funny tales in the Sahara, there is a story that says that an old man used to be a big liar. He lies wherever he is and whenever the people of the tribe gather. In meetings, the old man always recounts fabricated and untruthful tales. His little son hated his father’s behavior. He hated to see his father lying. All his attempts to convince his dad to stop lying were in vain.

Then, the son chose the strategy of confrontation. Whenever the father says a lie, the son interferes to stop him by telling the listeners: ‘don’t believe him, please. He is a liar’. As result, the father began to keep silent when the son is with him. But being unable to stop lying, the father himself changed his techniques and strategies for lying.

Whenever the son is present in a meeting, and to avoid his intervention, the father starts his speech by saying to the people: ‘listen please to this story which happened before the birth of this child.’ This way, the son could not say if the story to be told was true or a mere lie because the father said that it had happened before his birth.

The context of this tale is what has been happening recently in the camps of Tindouf and the shameful situations the leaders of the Polisario face as their lies are coming to their end because no one continues to believe their made-up stories and their tricks. The younger generation in Tindouf has understood the rules of the unfair game that the leaders of the separatist movement have been playing for nearly four decades. As the child in the tale mentioned above, Sahrawi youth are now exposing the lies of their leaders both inside the camps of Tindouf and outside.

The game is over for the old generation of ‘thieves’ and ‘opportunists’ who have used the issue of the Sahara to enrich themselves and to sell the humanitarian suffering of the refugees in the international community to obtain aid from international humanitarian organizations. The Sahrawi youth now are revolting from the inside because they cannot keep on believing the old tricks of Abel Aziz and his gangsters. So all what is left for the old man is to recount the stories that happened before the birth of the new consciousness inside the camps.

In this context, some two weeks ago, the Association of the Youth of Laarousyine Tribe in Spain and the Refugee camps denounced Polisario’s exploitation of the suffering of the Sahrawi people in order to enrich themselves. These youth called in their letters to the heads of Human Rights Watch, the United Nations and the European Parliament “to put an end to the disastrous situation in which our families live as refuges in the South of Algeria and the stagnation of the question of Sahara” because, according to them, the leaders of Polisario are “not capable of satisfying the expectations of the Sahrawis.”

In the same respect, The Youth of Laâroussiyine announced that they “chose the way of truth, breaking with the authoritarian methods of the Polisario which aim to monopolize the handling on the issue.” They had also rejected “the disastrous social, economic, political and human rights situation endured by the Saharawi people in the Tinduf camps” and condemned what they called in their statement, “the undemocratic and authoritarian methods of the Polisario leaders, ignoring the wave of change experienced among Arab peoples.”

Inside the camps, the situation is similar. More voices are rising to demand Mohamed Abdelaziz, who was reelected last week as head of the separatist Polisario movement, to “leave.” They are demanding more democracy and criticize ‘corrupt’ leadership. Besides the opposition voices claim that “Polisario’s leadership lack the ability to make progress in the negotiations, instead, it keeps focusing on individual profit, and taking advantage of the sufferings of our families in the camps of Tindouf, by looting the financial aid and adhering to the policy of inheriting the leadership of public institutions from each other.”

Accordingly, a group called ‘Youth of Sahrawi Revolution’ has raised their voice this week within the camps of Tinduf to ask Abdelaziz to ”quit.” In a banner erected in front of the headquarters of the Poilsario Front’s leadership, ‘The Youth of Sahrawi Revolution’ demanded the “departure” of Abelaziz. They denounced in their statement ”the undemocratic methods, and security environment,” which accompanied the last Congress of the Polisario Front. They considered the Secretary General of the Polisario as   “a major obstacle in the face of any solution to the Sahara issue.” Clearly, the youth no longer believe the Polisario’s lies and false stories.

Even the comrades of yesterday who have shared the dream of the revolution at the beginning of the 70s have realized that they had been tricked. Some of them returned to the kingdom where they are now participating in building the new Morocco of freedom, diversity, democracy, openness and change. They have answered the call that ‘the Homeland is clement and merciful,’ such as: El Hadrami, Gajmola ben abbi, the ex-military leader Ayoub Lahbib in addition to unlimited numbers of Sheikhs of the tribes who discovered the truth and chose to return to the homeland though ‘late’ but as the saying goes: ‘better late than never’.

Among those Sheikhs who escaped the camps of Tindouf is Mohamed Yislem Ould Al-Kouri who described the situation inside the camps as ‘inhuman and unbearable’. In one of his declarations after his return to his home city of Dakhla, Mohamed Yislem Ould Al-Kouri said that the camps of Tindouf are ruled by “a climate of oppression, suffering and insecurity” and that the camps are controlled by “criminal and groups active in drug and arms trafficking, and embezzlement of humanitarian aid in the camps that are largely uncontrolled and therefore offer good refuge for the development of illicit business.”

I think that we do not need to look for more justification to convince Mr. Abdelaziz that he is no longer believed by both the generation of the old nor by the young. The old comrades have left the camps and returned to their homeland where they are participating actively in the development of their country both regionally and nationally. The youth have now started their uprising and are asking him to “leave”. The youth no longer believe the old stories and the lies of grandmas. They want to find a solution for the issue to give them the right to come back home and live their lives as their brothers and sisters do in the southern provinces of Morocco.

To sum up, today Abelaziz is facing difficult challenges. He is between the hammer and the anvil and the question this raises is: for whom is Abelaziz going to recount his lies now that both the old and the young are asking for his departure? Surely, Abelaziz‘s situation today is worse than the situation of the father, the liar, in the Sahrawi tale mentioned at the beginning of the article.