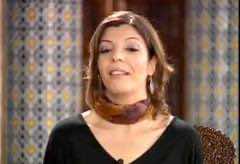 The Moroccan actress Latifa Ahrar declared that she has received death threats on Facebook following her controversial appearance on the red carpet of the Marrakesh festival. She was assailed by angry fans and critics for showing off her legs to a Moroccan audience still unaccustomed with this kind of display especially by a Moroccan actress. She had previously stirred controversy by undressing on stage during her play “«Kafr el Noam” provoking calls for censorship.

According to the daily newspaper Akhbar Al Youm, the Moroccan actress received a phone call from the new head of government Mr. Abdelilah Benkirane who condemned the death threats issued against the actress and expressed his solidarity with her. She also received a compassionate call form Najib Boulif, the proposed minister of finance in the emerging government. The actress expressed her appreciation to Mr. Benkirane for his call and asserted that the experience was carved in her memory.

Latifa Ahrar condemned the vicious attempts that have repeatedly tried to widen the rift between Moroccan artists and the PJD, a party that earned the trust of a great majority of the Moroccan electorate. She also described the head of government Mr. Benkirane as “a grand statesman”.

The PJD leadership denounced the vicious attempts to sow the seeds of discord between the party and the Moroccan actress. According to the PJD, there is an opportunist junta that endeavors to discredit the PJD by promoting certain labels and raising fears about the PJD agenda. The same PJD sources asserted that their party is renowned for its patriotic and moderate positions.

Political analysts consider that the PJD’s swift reaction to the controversy regarding the Moroccan actress is an attempt to ease tensions and deflect attention from trivial matters towards more pressing economic and social issues. These problems have prompted massive protests in Moroccan streets and they require well thought policies and a high level of coordination between different layers of society.

The PJD discourse has been moderate as it has tried to calm fears and suspicions of all those who have imagined a “Taliban” like agenda, banning music, imposing the veil on women or shutting down the wine business. Seemingly, the ascension of the Islamist party to power has left many to anticipate worst-case scenarios.

Giving the openness of Morocco’s society, the PJD’s stance on culture and creativity will most likely be more moderate than when the party was in opposition.

A few days after his appointment as new head of government by King Mohammed VI, Benkirane was keen on assuring Moroccans with secular leanings that his government will not interfere in people’s personal life.

“I will never be interested in the private life of people, Allah created mankind free. I will never ask if a woman is wearing a short skirt or a long skirt,” he told the press.