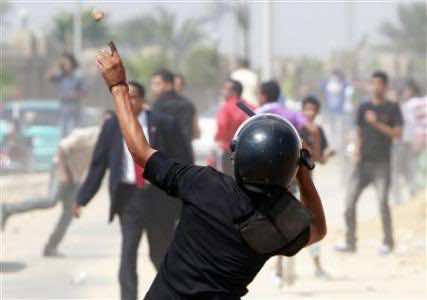 A criminal court in Cairo on Thursday acquitted five police officers who had been charged in connection with the deaths of protesters during the popular uprising that ousted Hosni Mubarak.

The officers had been accused of killing six demonstrators near a police station in the Sayeda Zeinab neighborhood of central Cairo, a judicial source said.

The court ruled that three of the officers had acted in legitimate self-defense when facing protesters armed with petrol bombs and other weapons excluding guns, who were also trying to set fire to the police station.

Two other officers were released after it was determined that they were not at the scene when the protesters were killed.

Around 850 people died in January and February during the unrest that led to Mubarak’s ouster, according to official statistics, and Egyptian police have been implicated in most of the cases brought by the relatives of those killed.

The authorities have in several cases tried to show that many members of the security forces had to defend themselves against attacks by protesters.

The ongoing trial against Mubarak is seeking to establish whether the former president gave direct orders to fire on those demonstrating against his regime.