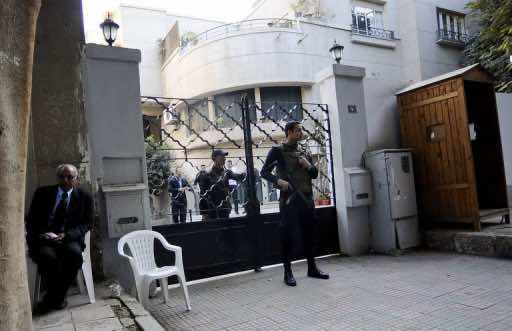 Egyptian police raided more than a dozen offices belonging to local and foreign rights groups on Thursday, as part of an investigation into alleged illicit foreign funding, an official statement
said.

At least two US rights groups — the National Democratic Institute (NDI) and the International Republican Institute (IRI) — were targeted in the operation, judicial sources said.

The raids, in which no arrests were reported, came as the authorities blamed foreign-funded groups for political unrest in the country after an uprising ousted president Hosni Mubarak in February.

The Washington-based IRI said it wasd “dismayed and disappointed by these actions.”

“IRI has been working with Egyptians since 2005; it is ironic that even during the Mubarak era IRI was not subjected to such aggressive action,” it said.

Police special forces blocked the entrance to the NDI offices in a Cairo villa as men in plain clothes, some of them members of the prosecution service, carried out computers and boxes full of files, an AFP correspondent said.

Witnesses told AFP that police had also closed off the IRI’s office and were confiscating its equipment.

The state prosecutor’s office said in a statement that a team of investigators from the prosecution service was searching “17 headquarters of branches of Egyptian and foreign civil society groups.”

They were carrying out an order from judges the justice ministry had tasked with investigating the groups’ foreign funding, after obtaining “serious evidence of their engaging in illegal activities,” the statement said.

The groups allegedly did not obtain licences to operate or permission from the foreign and social solidarity ministries, the statement added.

“Mubarak’s regime did not dare to undertake such practices prior to the uprising,” said the Arabic Network for Human Rights Information in a statement.

It accused authorities of “aiming to intimidate activists and rights advocates, gag their mouths and freeze their activities in support of human rights and against repression and torture.”

“Human rights organisations are the guardians of nascent freedom. Efforts to suffocate them will be a major setback and will surely backfire,” he wrote on his Twitter account.

The US embassy did not immediately comment on the raids against the offices of the NDI, which is loosely affiliated with the ruling Democratic Party, and the Republican Party-leaning IRI.

The probe, which began over the summer, coincided with Washington raising concerns with the ruling military about “anti-Americanism” in Egypt.

A cabinet source told AFP that the investigation was first launched in July by the ministry of international cooperation after the newly appointed US ambassador to Cairo, Anne Patterson, said the US distributed $40 million (35 million euros) to NGOs since Mubarak’s ouster.

The initial probe came amid a spike in tensions between the military and activists who want a speedier transition to civilian rule.

The military has described the activists as foreign-funded, an accusation that resonated in a country where there is abundant suspicion of foreign plots.

The military enjoys close ties with Washington and receives more than $1 billion in US aid annually, but it has blamed foreigners for plotting unrest and directing activists against the military.