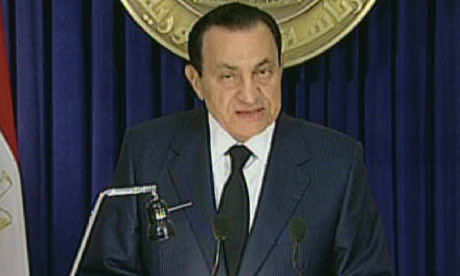 Ousted Egyptian president Hosni Mubarak was assessed by British Foreign Office officials as dim but “free of any taint of corruption” before he took power in 1981, files released Friday showed.

British prime minister Margaret Thatcher was told by officials that Mubarak was “the coming man” but “no intellectual”, according to The Daily Telegraph newspaper, citing files released after 30 years held in Britain’s National Archives.

Ahead of a visit to Britain, Thatcher was also warned not to mention his Welsh in-laws — Suzanne Mubarak’s mother was a Welsh nurse — unless Mubarak did first, as the couple wanted to play down the link.

A note from earlier in the year said Mubarak was likely to take over from president Anwar Sadat should anything happen to him. Sadat was assassinated in October 1981.

Mubarak resigned on February 11 this year after three decades of autocratic rule following a popular uprising in which more than 6,000 were also injured.

His murder trial resumed Wednesday after a three-month hiatus that saw the ousted leader’s fate eclipsed by deadly clashes and an Islamist election victory.

The ailing 83-year-old risks the death sentence if he is found to have been complicit in the killings of some 850 people who died during protests that overthrew him.