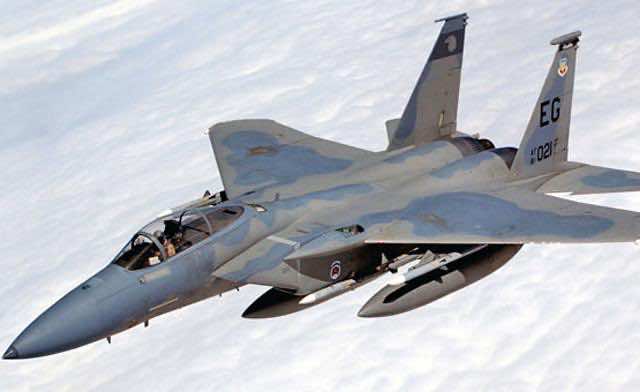 The White House said on Thursday a $29.4 billion deal to sell Boeing-made F-15 fighter jets to Saudi Arabia’s air force would support more than 50,000 U.S. jobs and give the American economy a $3.5 billion annual boost.

“This agreement reinforces the strong and enduring relationship between the United States and Saudi Arabia, and demonstrates the U.S. commitment to a strong Saudi defense capability as a key component to regional security,” Earnest said in a statement from Hawaii, according to Reuters.

He quoted unidentified experts as saying that the deal would support more than 50,000 American jobs, at a time of high unemployment, and provide $3.5 billion in annual impact to the U.S. economy, according to AFP.

The deal was announced formally as President Barack Obama vacationed in his native state of Hawaii, but had been first unveiled as far back as October 2010 as part of a $60 billion U.S. arms sale to Saudi Arabia.

Thursday’s announcement came at a time when tensions between Iran and the United States and its Gulf allies are rising, partly due to Tehran’s nuclear drive.

The U.S. sale of F-15 fighter jets to Saudi Arabia sends a “strong message” that Washington is committed to the Gulf’s security, a senior U.S. official said Thursday, amid rising tensions with Iran.

“It will enhance Saudi Arabia’s ability to deter and defend against external threats to its sovereignty,” Andrew Shapiro, a senior State Department official, told reporters, according to AFP.

Iran has rejected a warning that the U.S. military would not tolerate an attempt by Tehran to close the strategic Strait of Hormuz to tankers in a move that would threaten deep disruption to global oil supplies.

“In the Middle East right now, there’s a number of threats,” Andrew Shapiro, assistant U.S. secretary of state for political-military affairs, told a news briefing. “Clearly one of the threats that they face, as well as other countries in the region, is Iran,” he said.

But the sale was “not solely directed” toward Iran, Shapiro said. “This is directed toward meeting our partner Saudi Arabia’s defense needs,” he said.

The United States has long identified Iran as a major threat, partly for suspicion that its nuclear power program is a cover for weapons building, a charge that Tehran denies.

Deliveries to start in 2015

The Obama administration in October 2010 notified Congress of the proposed F-15 sale as part of a potential package valued at up to $60 billion over 10 to 15 years, including Boeing Apache AH-64 attack helicopters, munitions, spare parts, training, maintenance and logistics.

The first new F-15s are expected to be delivered to Saudi Arabia in early 2015, an administration release said.

The head of Boeing’s military business, Dennis Muilenburg, told Reuters the deliveries would take about five years to complete, extending the F-15 production line toward the end of this decade. The first modified Saudi F-15s are expected to enter overhaul in mid-to-late 2014.

Saudi Arabia was the biggest buyer of U.S. arms from Jan. 1, 2007 through the end of 2010, with signed agreements totaling $13.8 billion, followed by the United Arab Emirates, with $10.4 billion, according to a Dec. 15 Congressional Research Service report.

The announcement the F-15 deal had been clinched came as Obama swings more into campaign mode for a bid for a second term in November 2012, a campaign likely to be fought over the U.S. economy and job growth.

The Saudi buildup, part of a wider U.S. arming of its regional friends and allies, could eventually help offset the departure this month of the last U.S. combat troops in Iraq.

U.S. arms sales to Saudi Arabia often raise concern in Israel, but Shapiro said the Obama administration believed the new advanced warplanes would do nothing to curtail the Jewish state’s comparative military advantage in the region.

The Saudi arms package was controversial when it was sent to Congress last year, due chiefly to concerns over maintaining Israel’s edge. A total of 198 members of Congress wrote to the Obama administration in November 2010 to raise concerns about the sale. The so-called Arab Spring political upheaval in the Middle East this year also may have slowed negotiations.

The full total of F-15s, Apaches and 36 AH-6i helicopters, if purchased as planned, would yield Boeing and its industry partners about $24 billion in sales, he said.

Boeing shares closed up 85 cents at $74.11 on the New York Stock Exchange.