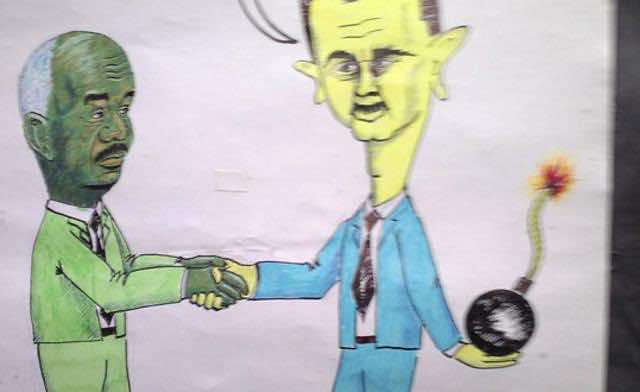 Syria’s opposition has called for the removal of the Sudanese general heading the Arab League mission on a fact finding mission in Syria because he held key security positions in the regime of President Omar al-Bashir, who is wanted on international charges of committing genocide in Darfur.

But Russia’s Foreign Ministry said on Friday that the comments from Arab League observers in Syria sent to check whether government forces have halted violence against protesters showed that the situation in the country was “reassuring.”

“Judging by the public statements made by the chief of the mission al-Dabi, who in the first of his visits went to the city of Homs…the situation seems to be reassuring,” the ministry said in a statement on its website.

The ministry said that Moscow was counting on the team’s “professionalism and impartiality.”

Lt. Gen. Mohamed Ahmed Mustafa al-Dabi when started his Syria visits in Homs said that the situation was “calm” and not frightening despite sniper gunfire and the sight of deserted armored vehicles on the streets.

The controversy swirling around al-Dabi raises troubling questions about whether Arab League member states, with some of the world’s poorest human rights records, were fit for the mission to monitor compliance with a plan to end to the crackdown on political opponents by security forces loyal to President Bashar Assad.

The Syrian opposition has branded the League’s mission a farce, citing the ongoing violence against anti-government protesters across the country even as the monitors worked on the ground. Arab League officials said the mandate of the monitors was not to intervene to stop the violence but to observe and report back to the group’s secretary general.

The 60 Arab League monitors who began work Tuesday are the first that Syria has allowed in during the nine-month uprising. They are supposed to be ensuring the regime is complying with terms of the League’s plan to end its crackdown.

The United Nations says more than 5,000 people have been killed in the uprising since it began in March.

Opposition critical of the mission

Syrian opposition groups have been critical of the mission, saying it gives Assad cover for his crackdown.

Amnesty International said Dabi led Bashir’s military intelligence service until August 1995, when he was appointed head of external security in Sudan. “During the early 1990s, the military intelligence in Sudan was responsible for the arbitrary arrest and detention, enforced disappearance, and torture or other ill-treatment of numerous people in Sudan,” it said in a statement.

“The Arab League’s decision to appoint as the head of the observer mission a Sudanese general on whose watch severe human rights violations were committed in Sudan risks undermining the League’s efforts so far and seriously calls into question the mission’s credibility,” Amnesty said.

“We know his history and his shallow experience in the area,” he said.

Another opposition activist, Omar Idilbi of the Local Coordination Committees, described Dabi as a “senior officer with an oppressive regime that is known to repress opposition,” adding that there are fears he might not be neutral.

The conflict in Darfur broke out in 2003, but has tapered off since 2009. The U.N. estimates 300,000 people died and 2.7 million have been displaced in the conflict. Dabi, unlike his mentor Bashir, is not formally accused of any crimes in Darfur.

De Waal, who interviewed Dabi for a book on Darfur he co-authored in 2008, said the Sudanese served in 1999 as Bashir’s representative for western Darfur, where serious fighting had broken out related to intertribal tensions and Darfur’s frustration with the Khartoum government.

“Dabi brought the situation under control with a show of force, including stationing military helicopters in the state capital and using them to intimidate the rebels. Many were arrested during his tenure, and thousands of refugees fled to Chad.”

The Darfur rebels, according to de Waal, said Dabi’s time in the area was “the beginning of the organization of the Janjaweed,” the name given to pro-government militiamen blamed for many of the atrocities committed against Darfurians.

Dabi argued at the time that it was necessary to show a firm hand in the face of dissent, de Waal said.

“It is striking that although he had retired from the army at that point, Dabi insisted he be allowed to wear a military uniform on his mission, on the grounds that this would ensure that he was respected,” De Waal said.

Tens of thousands of protesters rallied near Damascuson Thursday as Syrian security forces killed at least 25 civilians nationwide and peace monitors spread out to areas hit by unrelenting violence.

Some 30,000 people gathered in a square outside the Grand Mosque in Douma just north of the capital, prompting security forces to pull back from previously held positions, the Syrian Observatory for Human Rights said.

The observers, on the third day of a mission aimed at halting the bloodshed in Syria, also visited the central city of Hama, Idlib in the northwest, and Deraa in the south, according to Syrian television.

Deraa is the cradle of the unprecedented nine-month protest movement against President Bashar al-Assad’s regime, which has ruled Syria with an iron fist for 11 years.

The United States said Thursday the presence of Arab monitors in Syria had offered some benefit to protesters even if it had failed to halt the regime’s deadly crackdown.

“We are concerned… that even though we have monitors on the ground and they are playing a role in some places, we also have a continuation of the violence,” State Department spokeswoman Victoria Nuland told reporters.

Nuland cited reports of people killed in Homs, Hama and Idlib on Wednesday even as “monitors were trying to deploy” in those cities following the Arab League deal with the Assad regime.

“That said, if you go up on YouTube today, you can see great pictures of a democracy rally in Idlib that went forward with quite a crowd, at the same time that the monitors were there,” Nuland said.

“So clearly, their presence appears to have provided some space for public expression.”

The Arab League monitors’ mission, according to top Syrian opposition leader Burhan Ghalioun, was to ensure that the group’s agreement with Damascus is implemented, “stopping the killing and shooting.”

Speaking inCairo after meeting League chief Nabil Elaraby, Ghalioun said Assad’s regime was holding more than 100,000 prisoners, with some kept in military barracks and on ships off the Syrian coast. There is danger that they could be killed so they are not found, he warned.