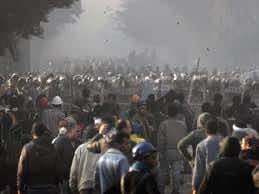 Raids by Egyptian police on rights groups were aimed at intimidating campaigners, the UN human rights body said Friday, calling for an end to “heavy-handed” tactics.

Officers searched more than a dozen NGO offices on Thursday as authorities blamed foreign-funded groups for political unrest after the uprising that ousted president Hosni Mubarak in February.

“Civil society organisations have reported that their files have been searched and seized and members were prevented from leaving their offices for the duration of the raid,” said Ravina Shamdasani, spokeswoman for the Office of the High Commissioner for Human Rights (OHCHR).

“Such behaviour on the part of the authorities appears to be clearly designed to intimidate human rights defenders who have long been critical of human rights violations in Egypt, including under the previous regime.”

OHCHR said the raids were one of many incidents in recent months where authorities interfered in the work of NGOs.

Investigators searched 17 offices of national and foreign civil society groups on Thursday, provoking concern in the US whose National Democratic Institute (NDI) and International Republican Institute (IRI) were among those targeted.

The team was carrying out an order from judges that the justice ministry had tasked with probing the groups’ foreign funding, after obtaining “serious evidence of their engaging in illegal activities,” a statement from the state prosecutor’s office said.

“We call on the government to cease the use of such unnecessarily heavy-handed measures and to ensure that civil society organisations can carry out their important work without undue interference,” said Shamdasani, while also urging the release of detained bloggers and rights activists.