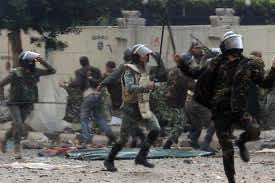 A major clampdown on human rights groups in Egypt has called into question the ruling military’s pledges of reform, drawing a torrent of criticism of its handling of the transition from Hosni Mubarak.

Prosecutors backed by police special forces stormed 17 offices of local and international non-governmental organisations on Thursday, confiscating computers and documents, as part of a probe into allegations of illegal funding from abroad.

The raids were part of a wider campaign by the ruling Supreme Council of the Armed Forces (SCAF) to silence dissent after months of criticism of its human rights record, analysts said.

Since a popular uprising ousted Mubarak in February, the military — which enjoys close ties with Washington and receives more than one billion dollars in annual aid — has repeatedly accused foreigners of stoking unrest and encouraging activists to oppose its rule.

But the military has stepped up its rhetoric after days of deadly clashes between troops and protesters demanding an immediate transition to a civilian government with full powers.

Rabab al-Mahdi, a political science professor at the American University in Cairo, says recent tirades by top generals against the protesters, and campaigns against the most vocal opposition movements are “indicators of a clear attack on voices of dissent”.

“The raids on NGO offices have to be seen in the wider context, they cannot be taken in isolation,” she told AFP.

In recent weeks, the military charged that it uncovered a plot to burn down parliament, while state media spoke of plans for nationwide unrest on January 25, the first anniversary of the launch of protests against Mubarak, in preparation for a foreign invasion.

“They are demonising anything foreign… in a bid to inject a sense of nationalism,” said Mahdi.

They are “trying to draw loyalty so that any attack on SCAF is an attack on the nation,” she added.

Hailed during the uprising for not siding with Mubarak, the generals now face growing discontent over their use of military courts to try civilians and suspicions that they are delaying the promised transition to civilian rule.

“There has been a smear campaign against the whole principle of foreign funding. The latest move is a way to narrow the space for civil society,” said Heba Morayef, Egypt-based researcher for Human Rights Watch.

“They have specifically targeted the NGOs most active in exposing military abuses and pushing for real reform,” she told AFP.

At least three US groups — the National Democratic Institute (NDI), the International Republican Institute (IRI) and Freedom House — were targeted in the operation.

The raids “represent an escalation of repression unheard of even during the Mubarak regime,” said David J. Kramer, president of Freedom House.

“It is the clearest indication yet that the SCAF — the military chiefs now ruling Egypt — has no intention of permitting the establishment of genuine democracy and is attempting to scapegoat civil society for its own abysmal failure to manage Egypt’s transition effectively,” Kramer said.

The investigation into foreign funding was first launched in July after US ambassador to Cairo, Anne Patterson, said Washington had distributed distributed $40 million (35 million euros) to NGOs since Mubarak’s ouster, a cabinet source said.

The allegations of an overseas hand in the financing of NGOs resonate in a country where successive regimes have long stoked popular suspicions of foreign plotting.

For Amnesty International, Egypt’s military rulers have failed to live up to their promises and have committed even worse rights abuses than Mubarak’s regime.

“Those who have challenged or criticised the military council — like demonstrators, journalists, bloggers, striking workers — have been ruthlessly suppressed, in an attempt at silencing their voices,” the London-based watchdog said in a report last month.