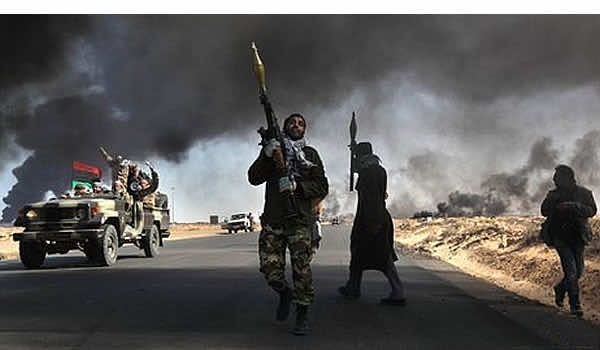 Al-Qaeda has sent seasoned militants to Libya in a bid to recruit a fighting force after the fall of Moamer Kadhafi’s regime, CNN reported Friday, but US officials played down the threat.

The militants include a veteran operative who was once detained in Britain as a terror suspect and who was allegedly sent to Libya on the orders of Al-Qaeda chief Ayman al-Zawahiri, the television news channel reported, citing a Libyan source briefed by Western officials.

The operative, who arrived in Libya in May, has since recruited some 200 fighters in the country’s east and Western intelligence agencies are tracking his efforts, CNN said.

Another operative, with European and Libyan passports, was arrested en route to Libya from the Afghanistan-Pakistan region in “an unnamed country,” according to CNN.

Following the collapse of Kadhafi’s regime in the face of an armed rebellion and a NATO-led air campaign, Western governments have voiced concern about violent extremists trying to exploit instability in the country or getting their hands on surface-to-air missiles.

But US officials say Al-Qaeda remains severely weakened from American operations and that there are no signs the network has made major advances in Libya in the wake of Kadhafi’s death.

“It is way too early for people to suggest that Al-Qaeda is going to establish a firm foothold in Libya,” said one US official, who spoke on condition of anonymity.

“They have a long ways to go to win the hearts and minds of the Libyan people,” the official told AFP, saying Libya was unlikely to serve as fertile ground for Al-Qaeda.

“It is entirely conceivable they would reject out of hand any attempt by Al-Qaeda or other extremist groups to shape their future.”

However, a US diplomatic cable from 2008 published earlier this year by the anti-secrecy group WikiLeaks portrayed the eastern Libyan town of Derna as a bastion for extremists.

Al-Qaeda in Iraq drew heavily from Libyans from the eastern area, according to documents found in Iraq.