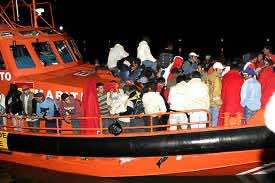 Morocco’s navy on Friday intercepted 32 of the country’s nationals as they tried to reach southern Spain by rubber dinghy, authorities said.

The migrants, aged between 19 and 30, were detained and will appear in court in the city of Al Hoceima on Monday.

Clandestine migrants from Morocco and other African countries often try to reach Spain by sea or via the Spanish enclaves of Ceuta and Melilla in north Africa.

Spain has welcomed Moroccan efforts over the past years to stem the tide of clandestine migration by stepping up controls along its Atlantic coast and in the Strait of Gibraltar.