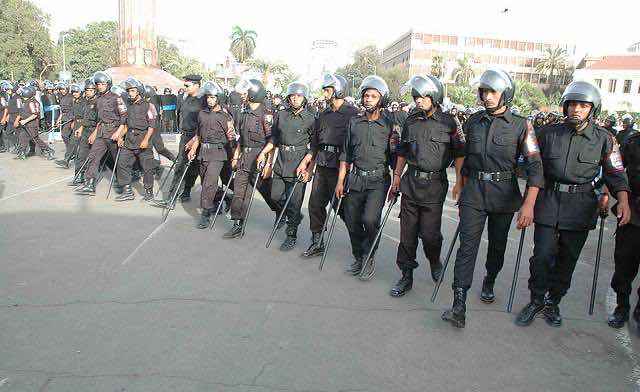 Egypt runs some risk of losing $1.5 billion in US military aid now that Egyptian prosecutors and police have stirred an uproar in Washington with raids on US-funded pro-democracy groups.

The State Department has hinted the funds could be withheld under a bill enacted a week ago linking the aid to democratic moves, and the sponsor of the legislation said Congress is ready to apply pressure in 2012.

“We do have a number of new reporting and transparency requirements on funding to Egypt that we have to make to the Congress,” State Department spokeswoman Victoria Nuland said after the raids on Thursday.

“The Egyptian government is well aware of that and it certainly needs to be aware of that in the context of how quickly this issue gets resolved,” Nuland said.

Nuland on Friday signaled progress toward defusing the crisis when she said Egyptian leaders offered assurances they will stop raids on US and other non-governmental organizations (NGOs) as well as return seized property.

The raided US organizations were the International Republican Institute, the National Democratic Institute, and Freedom House.

Prosecutors backed by police special forces stormed 17 offices of local and international NGOs on Thursday, confiscating computers and documents as part of a probe into allegations of illegal funding from abroad.

The raids fell under a wider campaign by Egypt’s military rulers to silence dissent after months of criticism of its human rights record, according to analysts.

“Actions like these are another reason why my appropriations sub-committee refused to give a blank check of foreign aid to the Egyptian military,” Vermont Senator Patrick Leahy said in a statement.

His legislation, part of a 2012 omnibus bill signed by President Barack Obama on December 23, offers Egypt $250 million in economic aid, and provides authority to forgive up to $500 million in Egypt’s debt to the United States.

It also provides $1.5 billion in military aid, but the secretary of state must certify first that Egypt’s current military leaders back the transition to civilian government.

That, Leahy’s office said, includes “holding free and fair elections, and protecting due process and freedom of expression, association, and religion, and abiding by the Israeli-Egyptian peace treaty.”

However, Secretary of State Hillary Clinton could waive the conditions for national security reasons.

“I’ve always been supportive of helping Egypt, but they’re making some colossal mistakes here if they think this is going to continue,” Leahy told AFP when asked to comment on the impact of the raids.

“I’m still going to be (committee) chairman in the coming year, and there is going to be more issues of aid to Egypt. And if there is not some improvement, I’m going to find it very difficult to put that in my bill,” he said.

“And I think you’re going to find both Republicans and Democrats will be concerned about putting the money in,” according to the Democratic senator.

But he said he first expected the State Department to use the bill to turn up the heat on the Supreme Council of the Armed Forces (SCAF), which has run Egypt’s transition since president Hosni Mubarak was toppled in February.

“I would assume that before we came back in session that the State Department would be bringing some pressure,” Leahy said.

David Kramer, president of Freedom House, said in a column in Friday’s Washington Post: “The Obama administration should tell Egypt’s military council unambiguously that assistance will end unless such behavior ceases.”

Daniel Kurtzer, a former US ambassador to Egypt who now teaches at Princeton University, said he was puzzled by the raids given the expected response in Washington, and he wondered whether the leadership had been united.

“It could be … elements within the SCAF and government who took this decision and now inside the government they’re trying to figure out what to do about it because maybe it wasn’t a formal decision,” Kurtzer told AFP.

“The question is how fast the Egyptians move to nip it (the uproar) in the bud,” he added. “They’ve got to act swiftly to prove that this isn’t a campaign designed to intimidate the NGOs.”