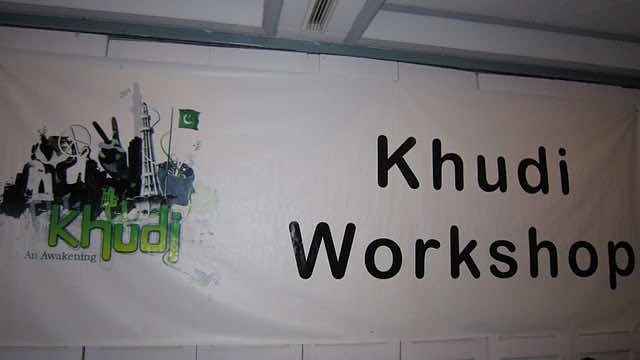 Pakistan, a country devastated by all types of evils ranging from corruption, to terrorism has been battling for years to consolidate its national unity, to redress its unraveling economy and to keep up with a hostile neighbor. Bordered by Iran in the West and Afghanistan in the North West, Pakistan occupies a highly strategic position.  It was incrementally involved in the global war against terrorism in a US led alliance.

Pakistan is also a country where religious extremism thrived at an accelerated rate infiltrating all aspects of life and hampering the development process. Pakistani youth, growingly discontent with religious despotism, are waging a campaign of disobedience against religious despotism. Founded by Majid Nawaz in 2009, Khudi is a Pakistani counter-extremism social movement that aims at promoting democratic culture in Pakistan. Our correspondent Loubna Flah has interviewed Rab Nawaz, a Khudi activist and editor of Pakistani youth magazine named “Laaltein”.

LF: What is the chief goal of Khudi?

Rab Nawaz: Our aim is to resist the growing infiltration of extremist narrative and to promote democratic culture.

LF: In what sense has religious extremism affected your life in Pakistan?

RN:  Well in many senses. First of all, religious extremism has added another obstacle to the continuity of weak democratic set up. In tribal and north Western areas, it has resulted in violent imposition of authoritarian norms, while in the mainstream Pakistan; it has hijacked the public discourse.

I was studying at Punjab University which is forcefully held by an Islamist student group. They used to beat, harass, threaten and even shoot youth on matters they opposed like mixed-sex classes. We resisted them by forming a group but they outnumbered us.  Many friends were shot and I, myself, was beaten repeatedly.

LF: Do you think that Pakistani youth feel uneasy about their Islamic identity? How about Youth in Khudi?

RN: Well, not all of them. In Khudi, we understand that this Islamic Identity cannot be so easily separated from the State, but it can ameliorate. I mean this identity needs to be distanced from violence and should be made to co-exist with other national, cultural and humanistic identities

LF: How do you expect Pakistan to be, a secular state?

LF: In your website, you assert that Khudi is neither a political party nor an NGO. What is the status of Khudi exactly?

RN: Well, a party usually has an agenda to advance once they come to power, we don’t want to do that. On the other hand, the work of NGOs in Pakistan is linked to funding and that drives the programmatic aims of NGOs. We couldn’t be categorized as a political party nor an NGO because our aim is to change the fabric of society at the grassroots level through spreading ideas and engaging in meaningful initiatives to raise awareness and empower the marginalized and vulnerable groups. Our focus is on cross-fertilization of ideas.

LF: How far can you contribute in changing mindsets in Pakistan as far as religious dogma is concerned?

RN: The real impact of Khudi would be a new generation of leaders and activists who strive to make Pakistan democratic, open, tolerant and developed society.

LF: Did you follow closely the uprising in the Arab countries? Was the Arab spring inspirational for Khudi activists?

RN: Yes, definitely. Khudi activists were inspired by the Arab spring events. We believe that we are not alone out there. Most importantly, it strengthened our belief that activism does work even in the toughest situations. On the other hand, we became more confident the effectiveness of non-violent resistance. It also showed us the importance of social media.

LF: Promoting democracy and fighting corruption are both pressing issues in Pakistan, why don’t you channel your efforts in this direction as well?

RN: We deem this front equally important, if not more, because only through democratization, can we hope to counter extremism in the long run. You can say that at this front our work is more focused on political training. We do work on topics related to combating corruption and promoting social accountability and local governance.

LF: How does Khudi convey its message and enforces its agenda?

RN: We primarily go to University campuses where we hold workshops, seminars and follow up focused group discussions, study circles… etc. We recruit people through this process. Apart from that, many people enthusiastic about our work contact us on internet or through friends. We also involve and recruit people through national and international conferences.

LF: Do you intend to organize street protests and peaceful demonstrations?

RN: Actually, we have already been part of some protests this year.

LF: Can we say that Pakistani youth are taking matters into their hands?

RN: Yes, in one sense. But it can have different connotations.

Extremists might also say the same, by asserting that since government failed to implement Shariah law, they are going to do that themselves. We have taken matters into our hands but in a different sense.

LF: Last, is Khudi a precursor to a Pakistani spring?

RN: You can say that, but surely it would take more time and hopefully would be less violent than the Arab Spring.