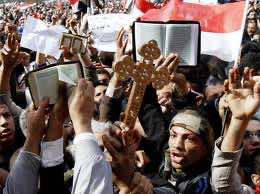 Sectarian clashes broke out in the southern Egyptian province of Assiut after a Christian student posted a drawing of the Muslim prophet on the Internet, officials said on Saturday.

On Thursday, dozens of Muslims tried to storm the home of the Christian student after the drawing appeared online.

Police were called to the scene, arrested the student and formed a cordon around the house to prevent clashes, Assiut governor Abdelrahim Borei said.

But on Friday, a group of Muslims set fire to a shop owned by the student’s father in a nearby village and another group burned Christian homes in another neighbouring village and clashed with its residents.

Borei has called for an emergency meeting with political and church officials as well as with recently elected MPs and members of ultra-conservative Salafi Muslim groups to try to defuse tensions.

“The situation is now calm in the three villages. We have deployed police in the areas in order to maintain order,” Borei told state television.

On Friday, Egypt’s military ruler Field Marshal Hussein Tantawi said the army would increase security around churches during the New Year and Coptic Christmas period, which falls on January 7.

Egypt’s powerful Muslim Brotherhood has also vowed to protect the country’s churches in a bid to prevent deadly attacks on Christian places of worship.

Last year, more than 20 people were killed in an apparent suicide bombing as hundreds of worshippers were leaving the Al-Qidissin (The Saints) church in the Mediterranean city of Alexandria after a New Year’s Eve mass.

In January 2010, six Copts were shot dead as they emerged from a Coptic Christmas Eve mass. A Muslim security guard was also killed in the shooting.

Coptic Christians, who make up around 10 percent of Egypt’s 82 million population, have been the target of frequent attacks and complain of systematic discrimination.