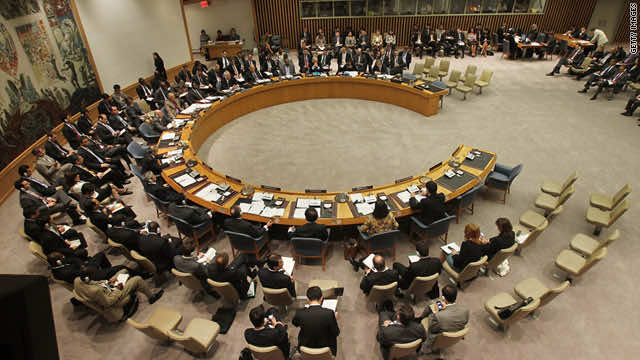 Five new countries on Sunday join a UN Security Council riven by one of the biggest international splits in years on how to handle the Arab Spring uprisings.

Azerbaijan, Guatemala, Morocco, Pakistan and Togo start two year terms on the council which has been wounded by air strikes in Libya and is battling over President Bashar al-Assad’s deadly crackdown in Syria. Growing tensions around Iran add to the nerves on the 15-member body.

“It is like the Cold War,” said one Western diplomat. Russia’s UN envoy Vitaly Churkin said the council’s work could be “seriously hurt” if the tensions persist.

Security Council resolutions 1970 and 1973, passed in February and March, and which ordered sanctions and allowed air strikes to protect Libyan civilians sparked the hostilities.

Russia, China and a group of council allies including South Africa, India and Brazil, which has just left the council, say NATO exceeded the UN mandate with the air strikes and pursued “regime change” against Moamer Kadhafi.

Britain, France and the United States say their action saved tens of thousands of lives.

Russia and China vetoed a European resolution condemning the violence in Syria, saying it would be the first step toward Libya-style military action against Assad. Western nations say those who blocked the resolution share responsibility for the 5,000-plus deaths in Syria estimated by the UN.

Russia has since proposed its own resolution, condemning violence by the government and opposition. Western nations say the text is “unbalanced” and three negotiation sessions this week made no progress, diplomats said.

Handling Iran’s nuclear drive is also deadlocked at the UN council, with Russia and China again indicating that they will not support tougher sanctions against the Islamic state. They are again blaming the Libya “backlash.”

Some diplomats say the council atmosphere is the worst since the US-led invasion of Iraq in 2003, some even say it is like going back to the Cold War.

Susan Rice, the US ambassador to the UN, said Europe’s Syria resolution had been blocked for “bogus” reasons by countries “who have other interests and agendas in Syria to the councils responsibility for protecting civilians.”

“Call it a backlash, call it the Libya hangover. It will be a difficult 2012,” said another senior Western envoy, speaking on condition of anonymity.

“It is not easy to see how we can get things done when the council is blocked like this.”

Thomas Weiss, director of the Ralph Bunche Institute for International Studies at City University of New York, predicted the bustup will blow over faster than the Iraq dispute which overshadowed the council’s work for years.

“But I can’t see anything happening on Syria soon. It is just stuck in the old politics of the region,” he said.

Russian envoy Churkin, the council president for December, said he was “worried” about the battle between the major powers at the council.

“There is a lot of nervousness, a lot of expectations that things are going to be done ‘my way and no other way’, that ‘what I need to have I must have now’, that no objections are entertained,” declared the ambassador.

“I don’t think this is a good way to work on the council and I think that if this trend were to continue it might seriously hurt the ability of the Security Council to work.”

The five new countries will take the place of Bosnia, Brazil, Gabon, Lebanon and Nigeria on the council, the UN’s supreme body for preserving peace and security.

Their arrival is not expected to have any major changes in votes on crucial issues such as the Palestinian application for UN membership, diplomats said. Britain, China, France, Russia and the United States can still veto any resolution as permanent members of the council.