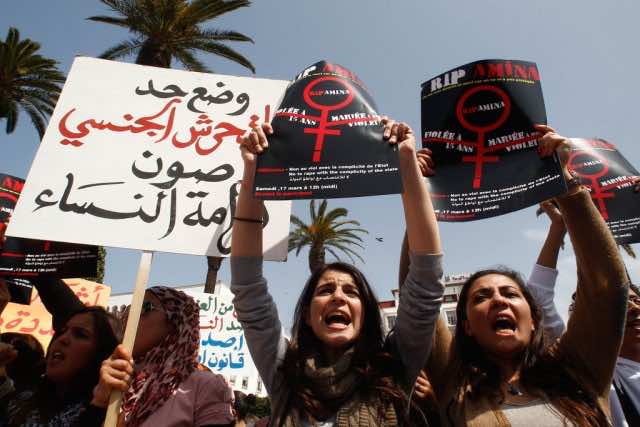 Rabat – Patriarchy is neither a concealed nor a restricted practice in Morocco. Until a couple of decades ago, public space had been male-dominated and women’s presence outside the house had to be chaperoned.

Men and women seemed to move in separate spheres, with very few exceptions. The family is traditionally headed by the father whose decisions are unquestionable and, in the case of his absence, the elder son is always there to take over. Women are inherently unable to thrive in separation of a male and they are not supposed to seek autonomy and claim responsibility.

However, as a result of recent socio-economic developments and the rapidly metamorphosed lifestyles, the stable and unshakable foundations of a traditionally patriarchic society have been quaked by the rise of what seems to be matriarchic power.

Such a view asserts itself in the governing nature of the transmuted relationship between genders in Morocco, a relationship challenged by shifting politics of power. This makes one wonder if this is ever possible and, if it is the case, how it is going to take place and be received by men who are stripped of what they consider validation of manliness.

Like any other oriental society where traditions and customs are strictly observed and manliness is highly cherished and valued, Moroccan society considers a woman a precarious and vulnerable spot in its fabric. She, consequently, requires constant and unusual care, as any breach of this vulnerability is direct harm and injury to manliness and a man’s pride.

This explains oriental men’s over-conservatism and excessive jealousy when it comes to their women. However, this should not be understood as totally negative, for in return for what seems like confinement and incarceration of women within the household, they enjoy total care and their needs are totally satisfied.

There is also the fear of manipulation of women by other men and even women, since they are considered as susceptible to bad influence. Hence, in order to ensure their manliness is untarnished and clean, oriental men in general are inclined to protect their women from turning into a threat to themselves and to society. This has been the balance for ages, but with the passing of time and the world shrinking, new lifestyles have emerged and have brought with them new conceptions to the role of women in society.

Moroccan society has been subjected to many changes dictated by socioeconomic factors that have redefined gender roles for a long time. Now women rub shoulders with men in many domains and fields that have been until recently male-exclusive.

Moroccan women had to run the gauntlet to assert themselves as active members in the country, which has gained them ground not only in their battle for work, but also in society. Women’s financial autonomy has been decisive in rearranging the Moroccan social scene. We can now find women sitting in cafes and restaurants, wearing all sorts of clothes like jeans and min-skirts.

Moreover, we can also find more westernized women smoking cigarettes or even drinking liquor, especially in big cities. These are all manifestations of their break away from male domination and social chains as they now dictate their own rules and define their own social role, but this has had another effect on men.

In other words, they have reversed the balance of power. This change has occurred so fast and in such a short period of time that it has enabled women not only to subvert male power but also surpass it, leaving men lagging behind in their efforts to adjust to tremendous and speedy change.

It is evident that men have found it immensely hard to keep up with the pace of change in the Moroccan society; however, this has had a counter effect on their situation. Instead of embracing the new social order, men have found compensation in stepping back. What this means is that instead of bridging the huge gap between them and women, men have chosen to cling to their historical principles and fight for preserving their leading role in society.

It is no wonder that an abrupt change such as this has been perplexing and overwhelming to Moroccan men who have found in the growing freedom of women a compensation for their lost influence and power. On the one hand, women gaining power is a scary issue; on the other hand, with women mingling in society as they go out to work, men believe they have more chance of gratifying their ego with the abundance of females around them.

Likewise, women, too, have been overwhelmed by their success in subverting a lot of traditions that had been, until recently, sacred and unquestionable. They, therefore, have embraced their new life with zeal and enthusiasm and become carried away by their eagerness for more freedom, breaking away from what they consider now as a social embargo to bring down any obstacles that have always stood between them and their male counterparts.

One direct outcome of this is that it has become very common, though not in a systematic way, to talk about friendship between males and females, a new concept that has instated itself in Moroccan society as a reference to the possibility of the existence of a platonic and chastised relationship between men and women.

It is not easy to refute such a claim as no one is in a position to doubt anyone else, but affirming its validity also remains too strong of a claim to make. Nonetheless, it is worth mentioning that the whole situation has turned on itself, resulting in a loss of trust between both men and women in Moroccan society.

As mentioned above, while women have completely metamorphosed their role within society, men have preserved their own attitudes, unable to digest or accept this change as it has been explained to them.

To any Moroccan man, with varying degrees of course, it is unperceivable how a man and a woman can coexist in immunity from sin. We can add to this the over-protective nature of Moroccan men towards their women. This has not disappeared altogether and jealousy is still governing much of their interaction with women.

The dynamics of the relationship between men and women in Moroccan society and the abrupt change this relationship has witnessed have restructured it from patriarchy to matriarchy, with women gaining more independence and stripping men of their historical superiority.

It is true that these changes are not systematic and there are places where women’s situation is still the same as always, but at the same time there are countless instances that prove the immense change witnessed in the role of women, and which testify to the shift in the balance of power in favor of women. This ‘new social order’ has its own byproducts that have established themselves as defining characteristics of this order, which is to be dealt with in the upcoming article.