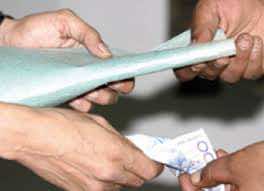 Fez – Corruption in Morocco is one of the most serious problems that society has been suffering from for a very long time. It is deeply rooted at different levels, which makes it a huge challenge to eradicate.

Moroccans are hoping for change with the election of the new government; however, they are doing their best to help combat and reveal the sources of corruption by using social networks to make easier the task of eradicating this “cancer”.

Social networks are widely used by Moroccan youth for different purposes. Lately, they have come to realize the power of these networks as not just a medium to waste time or chat, but rather as a tool and a weapon that can make a big difference, and even topple powerful tyrants, if used effectively.

This realization inspired some Moroccan youth to track down the sources of evil in their society. They used whatever medium available: mobile phones, small cameras, reports on direct observations accompanied with pictures…

Among the cases of corruption in Morocco that stirred much controversy is the case of the Moroccan doctor from Fez who was filmed and put on Youtube last Saturday. The four minute video showed the doctor, who works at Ibn al-Khatib Hospital in Fez, known as Koukar, selling medicines to a patient. People were outraged, taking into consideration that a doctor’s job is to examine patients and not to sell medicines at whatever price suits him; 150DH in this case. It also showed the doctor negotiating the price of a fake medical certificate that the patient asked for. The doctor demanded 200 DH for the certificate.

The video was widely circulated during the weekend throughout all the social media networks, especially Youtube and Facebook. Within five days, it was watched by more than 173.000 Youtube users.

The administration of the hospital initiated an investigation about the scandal and its doctor, who was asked to submit a written report about what happened and suspended from the Doctors Union until the investigation is completed.

In the daily newspaper Al Massae, the doctor claimed that it is a well-knit conspiracy not only against him as a person but against his political affiliation and his membership at the union. He said, “The events did not happen as showed in the video. There are many parts that have been cut, especially at the beginning. The patient explained that he is a needy person who needed help and that I refused to give him the medical certificate.”

Unfortunately for the doctor, the video is a strong evidence that cannot be easily rejected as it shows that he accepted the money. It also shows the fact that most Moroccans know about the system of bribery when it comes to health care in which money can work its “magic” in facilitating things.

Public hospitals across the country, not only in Fez, have been triggering much attention lately due to the corruption people encounter. Low quality services, lack of care and attention, poor hygiene, and bribery demands of some people in charge are among the serious problems hospital visitors suffer from.

Among the issues the page has raised is the case of pregnant women who went into labor at the doors of some Moroccan hospitals and gave birth there because they were not allowed in for unknown reasons. Among these women was one who died while giving birth at the door of a hospital in Nador.

Other issues exposed by the facebook group have been the problem of the use of very old materials that have affected the well-being of patients and their recovery; thigh prices at some public hospitals that are supposed to give free medication; the large number of medical errors that sometimes dramatically affect the lives of the patients concerned…

This initiative has been welcomed among Moroccan users of social media who consider it a way to reveal the hidden dark secrets of corruption in the country.