Yahoo Inc co-founder Jerry Yang has quit the company he started in 1995, appeasing shareholders who had blasted the Internet pioneer for pursuing an ineffective personal vision and impeding investment deals that could have transformed the struggling company.

Yang’s abrupt departure comes two weeks after Yahoo appointed Scott Thompson its new CEO, with a mandate to return the once-leading Internet portal to the heights it enjoyed in the 1990s.

Wall Street views the exit of “Chief Yahoo” Yang as smoothing the way for a major infusion of cash from private equity, or a deal to sell off much of its 40 percent slice of China’s Alibaba, unlocking value for shareholders.

“Everyone is going to assume this means a deal is more likely with the Asia counterparts,” Macquarie analyst Ben Schacter said. “The perception among shareholders was Jerry was more focused on trying to rebuild Yahoo than necessarily on maximizing near-term shareholder value.

“It certainly seems things are coming to a head as far as realizing the value of these assets.”

Yang, who is severing all formal ties with the company by resigning all positions including his seat on the board of directors, has come under fire for his handling of company affairs dating back to an aborted sale to Microsoft in 2008.

Yang’s exit comes roughly a month before dissident shareholders can nominate rival directors to Yahoo’s board.

The remaining nine members of Yahoo’s board, which includes Hewlett-Packard executive Vyomesh Joshi and private investor Gary Wilson, are all up for reelection this year.

Yang’s departure could be part of a broader board shakeup, said Ryan Jacob, chairman and chief investment officer of Jacob Funds, which owns Yahoo shares.

“If they don’t move quickly on these things, they run the risk of a proxy battle and they are doing everything they can to avoid that.”

The company did not say where Yang was headed or why he had suddenly resigned. CEO Thompson offered few clues in a memo to employees obtained by Reuters following the announcement.

“I am grateful for the support and warm welcome Jerry provided me in my early days here. His insights and perspective were invaluable, helping me to dig deeper, more quickly than I could have on my own, into some of the key elements of the company and how it operates.

Yang and co-founder David Filo, both of whom carried the official title “Chief Yahoo,” own sizable stakes in the company. Yang owns 3.69 percent of Yahoo’s outstanding shares, while Filo owns 6 percent as of April and May 2011.

In a letter to Yahoo’s chairman of the board, Yang said he was leaving to pursue “other interests outside of Yahoo” and was “enthusiastic” about Thompson as the choice to helm the company.

Yang, 43, is also resigning from the boards of Yahoo Japan and Alibaba Group Holdings.

Respected in the industry as one of the founding figures of the Web, Yang has come under fire over the years from investors and to some extent within the company’s internal ranks.

“Lots of people think he holds up innovation there with old ideas and (is) slow to decide and that he’s not an innovator himself for being at such a high level,” said one former Yahoo employee.

“People have very high expectations for founders. Everyone wants a Steve Jobs,” the employee said, referring to Apple’s co-founder who brought the company back from near death and transformed it into the world’s most valuable tech company.

Some analysts say the Yahoo board’s indecision stems in part from Yang’s sway in the company. Disillusioned by the company’s flip-flopping, they warn that the rest of the board remained much the same as the one that rejected Microsoft’s unsolicited takeover bid when Yang was CEO.

“Jerry Yang was certainly an impediment toward anything happening,” said Morningstar analyst Rick Summer. “This is a company that’s been mired by a bunch of competing interests going in different directions. It was never clear what this board’s direction has been.”

Microsoft’s bid was worth about $44 billion. Its share price was subsequently pummeled by the global financial crisis and its current market value stands at about $20 billion.

More recently, Yang and Yahoo chairman Roy Bostock have incurred the wrath of some major Yahoo shareholders for their handling of the “strategic review” the company was pursuing, in which discussions have included the possibility of being sold, taken private or broken up.

Yang’s efforts to seek a minority investment in Yahoo from private equity firms enraged several large shareholders, including hedge fund Third Point, which accused Yang of pursuing a deal that was in “his best personal interests” but not aligned with shareholders’ interests.

Yahoo has also been exploring a deal to unload most of its prized Asian assets in a complex deal involving Alibaba, valued at roughly $17 billion, sources told Reuters last month.

Alibaba Group’s founder, Jack Ma, whose personal relationship with Yang led to Yahoo buying a 40 percent stake in Alibaba in 2005, said he looked forward to continuing a “constructive relationship” with Yahoo.

Susquehanna analyst Herman Leung said: “I had thought that Jerry Yang was a lifer at Yahoo.

“Without him on the board, this could smooth a potential transaction. What that transaction is, is any of our guesses right now.” 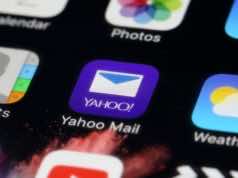 All You Need to Know about Security Breach of Yahoo