An explosion killed at least 14 people and injured 32 on a minibus carrying prisoners in Syria’s northwestern province of Idlib on Saturday, the opposition Syrian Observatory for Human Rights reported.

“Eleven prisoners were killed in the explosion which targeted a prison truck on the road between Idlib town and the village of Mastumeh,” group’s chairman, Rami Abdel Rahman, told AFP by telephone.

A number of security personnel accompanying the prisoners were wounded, Abdel Rahman said, without being able to provide details.

The British-based group, which monitors a 10-month-old uprising against Syrian President Bashar al-Assad, gave no further details. No independent confirmation was available.

Separately, the Observatory reported that a member of the security forces was killed in fighting between dissidents and soldiers at Kfarnebel, in the Zawiya mountains of Idlib province, with troops using heavy machineguns.

It also said security forces had arrested seven people Saturday, including four members of the same family, in Iblin village.

The United Nations estimates that more than 5,400 people have been killed in Syria since anti-regime demonstrations erupted in March.

Meanwhile Syrian state newspaper Ath-Thawra newspaper reported on Saturday that Qatar, which has called for Arab troops to deploy in crisis-hit Syria, is a “tool” being used by the United States against Damascus.

The claim was made as Arab League foreign ministers are to meet in Cairo on review an observer mission critics say has been unable to stem the violence in Syria. League officials have voiced satisfaction with the mission’s progress so far.

“It is clear that Qatar, disappointed by the first report of the observers, has started to distance itself from the Arab League and the report expected” on Sunday, the paper wrote.

The emir of Qatar, Sheikh Hamad bin Khalifa al-Thani, only has use for the observers if they give “their approval to put in place his plans, conforming with the obligations taken from Washington”, the paper alleged.

The emir told the U.S.-television program “60 Minutes” that Arab troops should deploy in Syria to “stop the killing,” in an interview broadcast last Sunday. Syria has fiercely rejected the proposal.

The paper accused Qatar of financing the armed insurgents that Damascus blames for fuelling 10 months of unrest that has claimed more than 5,400 lives, according to U.N. estimates.

The paper charged that Washington does not want to be “directly implicated” in the Syria crisis and therefore “intends to turn Qatar into a tool to tear down” Assad’s regime.

The head of the Arab League mission, General Mohammed Ahmed Mustafa al-Dabi of Sudan, will present a report to Arab foreign ministers, after a meeting of the League’s Syria crisis panel, which is chaired by Qatar. 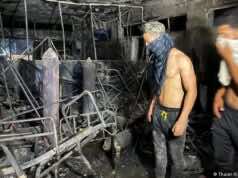