“Field Marshal Hussein Tantawi, the head of the Supreme Council of the Armed Forces, has announced in a letter to the people’s assembly the transfer of legislative power to the assembly,” the cabinet said on its Facebook page.

A year after the uprising, many Egyptians see the new parliament as the first sign of democratic rule, in sharp contrast to the previous legislature dominated by Mubarak’s party.

A marathon parliamentary election, which ended just days ago, saw Egypt’s two main Islamist parties catapulted to the centre stage of politics, having clinched nearly three quarters of the 498 seats.

In their first act, newly elected deputies voted in Saad al-Katatni, leading member of the powerful Musim Brotherhood, as the new speaker of parliament.

“We want to build a new Egypt, a constitutional, democratic and modern Egypt,” Katatni said in a speech after being sworn in.

“Democracy will be the source of our parliament’s power,” he added in remarks greeted with applause.

Katatni, 59, served as the secretary general of the Freedom and Justice Party, the political arm of the once-banned Muslim Brotherhood, which won 47 percent of seats in the first free elections since the revolt.

“We say to the Egyptian people and to the world that our revolution continues,” Katatni said to more applause.

Outside the People’s Assembly, hundreds of Islamist supporters greeted the MPs as they entered the parliament, in scenes unimaginable just a year ago when most Islamist movements were banned.

But the exact role of parliament remains unclear, with much power remaining in the hands of the generals who took over from former president Mubarak.

“How can we read this oath when we don’t even know if we will be a presidential system or a parliamentary system?” one MP asked during the swearing in.

Hundreds of protesters also gathered outside parliament amid heavy security to press deputies to implement the goals of the revolution, including an end to military trials of civilians, social justice and the trial of officials found guilty of abuse.

Others chanted against the ruling military council and its chief Field Marshal Hussein Tantawi, who served as Mubarak’s defence minister for two decades.

Katatni thanked “the great Egyptian army and the (ruling) Supreme Council of the Armed Forces, which stuck to its promise that it would hold elections that the world could boast about.”

The military has repeatedly pointed to the landmark polls as proof of its intention to cede power to civilian rule, but it has come under intense criticism in recent months for rights abuses and for stifling dissent.

Activists accuse the generals of seeking to maintain political control despite the army’s assurances it will cede power to a civilian authority when a president is elected in June.

Before Katatni’s election, the packed and sometimes chaotic first session was chaired by parliament’s most senior member, Mahmud al-Saqqa of the liberal Wafd party.

The deputies were sworn in one by one, pledging to “preserve the safety of the nation and the interests of people and to respect the constitution and the law.”

In a sign of the Islamists’ increasing assertiveness, one ultra-conservative Islamist MP insisted on adding a religious reference to the oath.

Lawyer Mamduh Ismail took the microphone vowing to also “abide by the law of God,” but he was sharply rebuked by the chair, Saqqa.

“Please stick to the text,” an angry Saqqa urged Ismail, asking him to repeat the oath several times.

Others tried to add “to protect the goals of the revolution” to the oath and received a similar rebuke, during the animated first session which saw several deputies don yellow sashes calling for “an end to military trials of civilians.”

The long-banned Muslim Brotherhood won a crushing elections victory with 47.18 percent through its Freedom and Justice Party.

The liberal Egyptian Bloc — which includes the Free Egyptians party of telecom magnate Naguib Sawiris who faces trial on allegations of insulting Islam — came fourth with around seven percent.

The 508-member assembly was dissolved in February by the Supreme Council of the Armed Forces.

The Brotherhood, Egypt’s best organised political grouping, had been widely expected to triumph in the polls but the surge by Al-Nur and high visibility of Salafi movements have raised fears about civil liberties and religious freedom.

Elections for parliament’s upper house, the Shura Council, are to begin later this month and end in February. Then the two chambers will choose a 100-member panel to draft a new constitution. 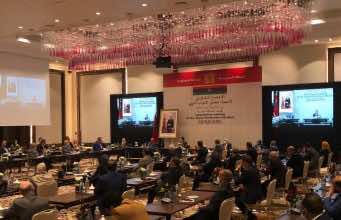