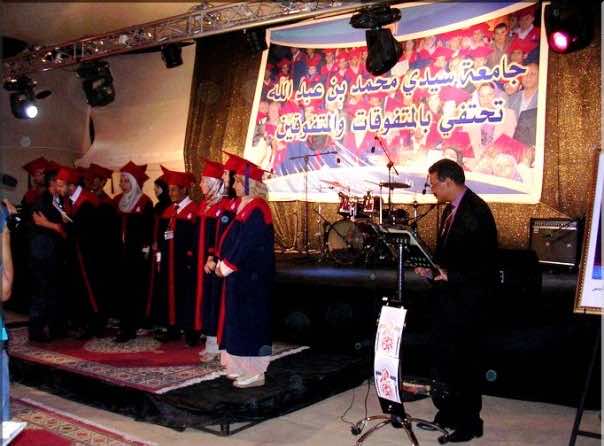 Last Thursday was a day of celebration of the documentaries produced by the Cultural Studies Master students at Sidi Mohammed Ben Abdellah University in Fez. The documentaries revealed the creativity and the talent of the students learning documentary filmmaking. This experience in a new field broadened the students’ world view, developed new skills, and brought out a spirit of team work.

For years, the Cultural Studies Master Program included the study and analysis of visual culture in its various types: documentaries, movies, advertisements, postcards, etc. Students were required to sharpen their critical thinking skills in decoding the various messages carried through these media forms. Eventually, professors at the program sought to introduce the practical side of documentary filmmaking through a program that is co-sponsored by the Fulbright Commission and the American Language Center in Fez (ALC).

Dr. Khalid Bekkaoui, Professor and Chair of the Department of English, and also the director of the Documentary Filmmaking program, said: “We did teach the theories and approach of documentary filmmaking but it lacked the technical and practical side. It is a challenge to teach the students the same skills that are developed at sophisticated schools, like in Ouarzazate.

We tried to incorporate the academic side in which students have to do research, and have a perspective and methodology. It is not simply about learning a particular skill, but about how students can become real documentary makers starting from ideas, researching these ideas and turning them into stories, and then managing the technical side.”

Dr. Bekkaoui continued: “I’m very happy and satisfied with the documentaries the students produced. It shows how committed they were to the program despite the challenges they faced, especially considering that these are their first projects. The program was an idea that developed into a module and we’re working to turn it into a separate masters program.”

I was one of the students who benefited from this program, which gave us a space to be creative and to develop new skills and even world views as documentary filmmakers. When we first were told about the program, we were very excited but at the same time we didn’t know what to expect. Now, when I see how far we have come, I believe this program has produced capable and successful filmmakers. During our studies, we were taught a variety of different roles: editor, director, presenter, even interviewees. Beyond the three hours in the classroom, we worked throughout the week, directing, editing, and  collaborating with our classmates and professor.

According to Professor Jamal Morelli, Documentary Making Class Supervisor and Filmmaker, “Publishing un0doctored truth is a rarity in Morocco. Training people to capture reality—not distort it out of fear—and then share that captured experience not only makes a great filmmaker, journalist, or writer, but a better human being. Morocco needs courageous journalists and filmmakers.”

Professor Morelli was in charge of teaching the students the necessary skills to make their documentaries and how to effectively use different mediums: “I focused on editing the most. [The students] also learned how to frame shots, create storyboards, and write scripts. I think the greatest challenge was in not being able to say everything they wanted to say, and the resistance of Moroccans to being filmed. For some, the transition from theory to practice was a shock. And for still a few more, having an unhinged Italian-American as a supervisor was a giant hurdle,” he said.

After training independently on projects, the students produced documentaries as groups, working on five major themes that focused on cultural issues and recent changes:

-Moroccan Youth and the Culture of McDonalds.

-My Neighbor: the Jew.

Prof. Morelli expressed pride with his students’ productions, especially considering the limited resources. “Yes, I am extremely satisfied. As their supervisor, I would be up with many of the editors at 3 a.m. discussing technical problems related to the editing process, and music and content choices—and so I have a special insight into all of the insanely grueling work these creative individuals put into their films.

Regarding the quality, I feel that the sincerity and inspiration of the student filmmakers comes through clearly. These are important movies which you can’t compare to any other Moroccan films which have been made.”

This program expanded the traditional university course, where the student is limited to the classroom. The filmmaking experience develops technical and academic skills, but also allows for growth on a level that opens new horizons and doors to the future. One of the students, Hama Oueld Shiekh, has already been invited to train with the Aljazeera Documentary Channel, an opportunity he never dreamed of achieving before.