Lufthansa, Europe’s biggest airline, said Wednesday it would resume regular services to the Libyan capital of Tripoli following a year-long suspension of flights because of the unrest there.

Lufthansa said in a statement it would resume flights between Frankfurt and Tripoli three times a week — on Mondays, Thursdays and Sundays — starting from Thursday.

The group’s Austrian subsidiary, Austrian Airlines, also said Wednesday it would resume five weekly flights between Vienna and the Libyan capital from March 25. 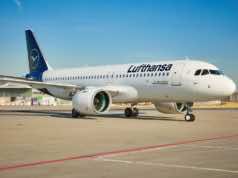