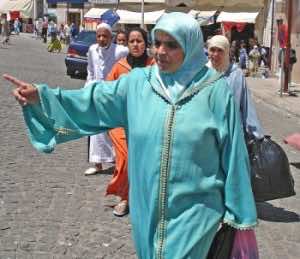 Barcelona – This is a response to an article entitled “Gender Roles in Morocco: Is It the Decline of Patriarchy and the Rise of Matriarchy,” written by Moundir Al Amrani, and published in Morocco World News on January 10th, 2012.

In this article, the author discusses changes in the structure of Moroccan society that includes changes in women’s rights. He goes on to make the case that Morocco has shifted its control and power from that of a patriarchy to that of a matriarchy. I strongly believe Al Amrani to be mistaken in his position and aim to discuss some of the larger problems with his arguments.

The author begins by explicating how traditions and customs of Morocco have traditionally left males feeling superior to women in both private and public spheres.  He explains how over-conservatism and excessive jealousy is common in Moroccan males.

Subsequently, women have, traditionally, been confined and even incarcerated within the household. “This,” he writes, “should [however] not be understood as totally negative, for in return for what seems like confinement and incarceration of women within the household, they enjoy total care and their needs are totally satisfied.”

This is a problematic writing for several reasons. First and foremost, the author points to something he judges to be a social problem, after which he fails to present the readers with a solution to the negative features of men’s socially shaped behavioral characteristics. He then goes on to connect these behaviors to the treatment of women, which, he states, includes confinement and incarceration in the home. Al Amrani then defends the culture of incarcerating women, seeing, as he writes, ”women are completely cared for and their needs are totally satisfied.”

The word ‘incarceration’ refers to the practice of putting someone in prison, because that person is suspected of committing a crime, or has, in fact, committed a crime. The idea is to isolate, punish and deter the criminal from thinking certain thoughts and perform certain behaviors. While some may feel that being a woman is a crime in itself, it is, as of yet, not one!

The very nature of language that includes rhetoric like incarceration and confinement, when one talks about women’s lives, is loaded with cultural and social bias that precisely aids in a continued regression of women’s rights.

The idea that a woman has her needs met while being confined to the home against her will is, at best, foolish.

Fundamental human needs are food, shelter, safety and work, rest, inclusion, respect, autonomy, health systems, social security, imagination, self-esteem, and participation through literacy; along with many other needs. These needs are the same for men as they are for women.

Women in Morocco die much earlier than men, primarily due to poor nutrition and lack of healthcare. The majority of women continue to be uneducated, significantly limiting their employment opportunities and ability to make free and autonomous choices for their own life, as a fact.

Infant mortality rates are also high, a consequence of poor maternal care and lack of access to basic healthcare from inside the home.Despite domestic violence-awareness campaigns, domestic violence is still common and, according to studies, over 75 % of reported assault incidents are assaults committed by husbands.

It is the case, as the author points out, that Moroccan society has undergone many social changes in a relatively short period of time. After his ascension to the throne, King Mohammed VI made woman’s rights one of his many priorities. He did this, in part, because he understood that to have a healthy and successful country, one must include both women and men in a healthy, respectful and constructive coexistence.

Women matter equally, simply on the grounds that they make up 50% of the population. Women are important in the workforce, as well as public discourse. Including women leads to a progressive and healthy society that can, and already has proven that it does, compete more effectively internationally, and create a greater overall acceptance as a nation of importance across the global community.

The fact that women are very slowly becoming more visible in Moroccan society is a wonderful addition to the dignity and charm that is Morocco, but it is not, by a long stretch, the indication that women “have reversed the balance of power”, as the author claims.

A matriarchy is by definition a society structured in such a way that females hold all central roles in government and political leadership, as well as all ideological, religious, and moral authority. Morocco can’t be a matriarchy, because the country is ruled by a male; a king who holds some constitutional power, and is governed by a newly elected ministry made up of 99% males. The mosques are guided by male leadership. Technically, legally, morally, and logistically Morocco is a strong patriarchy.

While it is clear that Al Amrani is confusing his definitional terms, it is less transparent to what extent he sees women’s emancipation as an overall good or an overall evil. One gets the impression that Al Amrani opposes, or has some grave concerns with, the progress in gender roles of recent years.

There is some sense that a slight insecurity about the new role of males drives his argument for a “shift in the balance of power in favor of women” and that this shift is not desirable. He tends to use word like “power” in a way that stratifies women against men, rather than accept women’s desire to be alongside men.

One example of how he does that is in his comments on women and clothing, which I find concerning. Let us be clear; women in the west no longer dress a certain way to make a statement of social gender independence. They simply dress that way, because they want to and because they can. In the west, clothing tends to be a statement of fashion and personal style.

Average clothing no longer socially define women’s role in society in the same manner that clothing does it in Morocco. It appears, however, from the article, that  Moroccan women who choose to dress ‘western’ are not simply putting on clothes; they are also giving a message to the world about their independence and desire towards a moving away from traditional gender roles.

I agree, to some extent. I too am of the opinion that Moroccan women who dress in western wear are wearing a social message, whether they intend to or not. I would even go so far to say that some Moroccan women have misinterpreted western culture in such a way that wearing extremely hyper-sexualized clothing and smoking seems to make them think they are  ‘more western’ and, therefore, in some sense, more modern or free.

This, however, in a country like Morocco, may instead have the opposite effect. They can risk being thought of as ‘easy’ or ‘cheap’ and men may attempt to make inappropriate sexual advances, which limits women’s freedom.

This small group of women, nonetheless, is still a far cry from the vast majority of women, about whom the author judges that they “have been overwhelmed by their success…they have embraced the new life with zeal…and [have] become carried away by their eagerness for more freedom.”

I choose here not to go into depth with the implied insult that women are irresponsible, immature and childlike creatures who tend to get carried away.

This type of andocentric rhetoric is precisely what makes the path towards female emancipation so difficult. This being said, I feel compelled to note the fact that more and more women are beginning to verbalize their desires to have education, work and a voice, is not getting ‘carried away’; it is simply being a person who wants to be part of society.

The freedom to choose ones clothing accordingly, is part of the emancipation process.

Overall, I agree with the author on one account; that the social changes for women have been somewhat perplexing for men.

There is a real need for Moroccan men to step up as socially responsible individuals and grow as persons with the changes that are occurring in Morocco. Fathers need to learn how to raise daughters who can succeed in a country where their human rights are slowly but increasingly being met. Husbands need to reinterpret their role in marriage as equal and caring partners rather than rulers. Brothers need to support their sisters as they together find a way to live public and equal lives.

In a dating environment, men need to learn how to be friends with females, and date based on complementary personality characteristics, rather than traditional marriage perceptions of who would make a ‘good Moroccan wife’.

Male teachers and other male role models must make it a priority to support and accept women among them and as their peers. Most importantly, the religious community needs to come on board with the new gender roles. It is incumbent upon imams to educate and guide their congregations towards gender inclusion and mutual respect; a most possible and Islamic ideal.

If it truly is the case, as Al Amrani claims, that  “any Moroccan man…[find it ] unperceivable how a man and a woman can coexist in immunity from sin” then Moroccan men obviously have a great deal of learning to do! The sooner they accept this task and grow as human beings, the sooner their mothers, daughters, sisters, and female friends will have better, richer, and more meaningful lives.