CAIRO - A Salafist MP suddenly stood up in the middle of  a session of Egypt's parliament on Tuesday to issue a call for Muslim prayers,  earning a reprimand from the speaker of parliament. 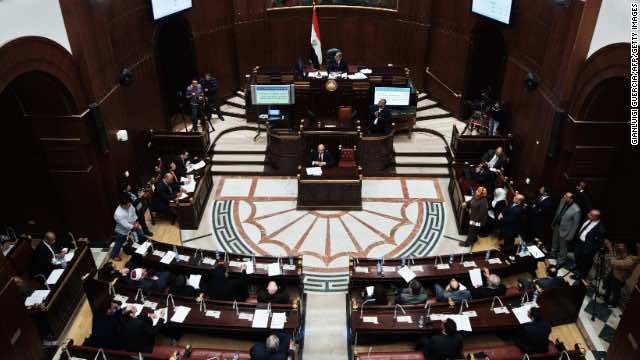 CAIRO – A Salafist MP suddenly stood up in the middle of  a session of Egypt’s parliament on Tuesday to issue a call for Muslim prayers,  earning a reprimand from the speaker of parliament.

“I never gave you authorisation. There is a mosque for the call to  prayers,” said speaker Saad al-Katatni, himself a member of the Muslim  Brotherhood, only to be ignored by MP Mamduh Ismail who put his hands to his  ears in prayer.

“Mr deputy Mamduh Ismail has violated the rules and issued a call to  prayers … without asking the president of the house. There is a mosque for that,” said the speaker, amid smiles from several amused deputies.

“This chamber is for debate … You are not more Muslim than the rest of us and we do not want to pray any less than you do,” said Katatni.

Ismail, whose hardline Islamist party came second to the Brotherhood in a legislative election Islamists dominated, was called to order last month when he added that he would not violate God’s law to the swearing-in oath.