The outcome of any talks on ending the bloodshed in Syria must not be predetermined, Russian Foreign Minister Sergei Lavrov said on Wednesday, sticking to its opposition to Western and Arab pressure for President Bashar al-Assad to cede power.

Lavrov’s remarks at a news conference in Moscow after talks with Pakistan’s foreign minister suggested Russia, which vetoed a draft U.N. Security Council resolution supporting an Arab League call for Assad to quit, has not changed its stance on Syria following a meeting with Assad in Damascus on Tuesday, according to Reuters.

Lavrov said that Syrians themselves should decide the fate of their leader.
“Any outcome of national dialogue should become the result of agreement between the Syrians themselves and should be acceptable to all the Syrians,” Lavrov told reporters, sidestepping a direct question from a reporter about Assad’s fate, according to AFP.

Lavrov said that Assad has commissioned his Vice President Farouk al-Sharaa to start an integrated dialogue and to carry out reforms in the country, Al Arabiya correspondent in Moscow said.

The Russian top diplomat, who was given a hero’s welcome by Assad’s supporters in Damascus, said that recalling envoys from Damascus did not help promote the Arab League’s plan.

“I do not think that recalling ambassadors helps create conditions that would be favorable to the realization of the Arab League’s initiative,” he said after several Western and Arab states recalled their envoys from Syria.

After Tuesday’s talks Lavrov said Russia was prepared to work to end the crisis under a peace plan put forward by the Arab League and that Assad was ready for dialogue with all political forces.

The latest Arab League plan would see Assad transferring power to his deputy and a government of national unity formed within two months.

Russia’s veto of a Security Council resolution on Syria goes far beyond mere protection for a close ally and arms buyer — it showed Moscow’s determination to crush what it sees as a Western crusade to use the United Nations to topple unfriendly regimes. 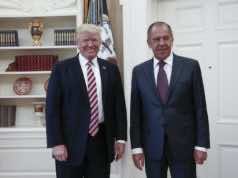