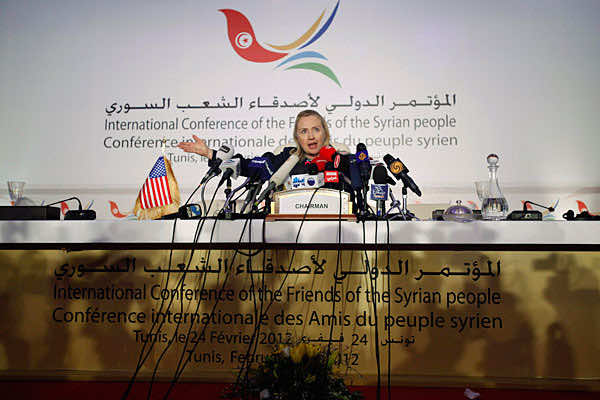 Tunisia will host a “friends of Syria” conference next week in a bid to press for political change in Damascus, its foreign minister said Wednesday.

“We hope that we’ll have a consensus and a unified message in favour of political change” in Syria, Rafik Abdesalem told reporters in Lisbon following talks with his Portuguese counterpart Paulo Portas.

“We need to send a strong message to the Syrian regime that they have to stop the open killing of innocent and civilian people,” he added.

Tunisia has invited members of the Arab league and the European Union, along with the United States, China, and Russia to attend the February 24 conference, Abdesalem said.

Tunisian President Moncef Marzouki said Sunday that he hoped the bloodshed in Syria could be stopped under a similar scenario to the one which saw Yemeni President Ali Abdullah Saleh relinquish power.

After months of bloody clashes between security forces and pro-democracy protestors, Saleh, who came to power in 1978, signed a deal that effectively ends his rule but protects him from prosecution.

Portas welcome the Tunisian move and called on the international community to help “kick off a peaceful and negotiated political transition process” in Syria.

More than 6,000 people have been killed since President Bashar al-Assad’s forces launched a crackdown on protesters calling for democracy in March last year, according to monitoring groups.

The UN General Assembly is to vote Thursday on a resolution calling on Assad to stop deadly attacks on civilians, after Russia and China vetoed a second Security Council resolution on February 4, saying it was “unbalanced.”

UN High Commissioner for Human Rights Navi Pillay told the General Assembly on Monday that “crimes against humanity are likely to have been committed” in Syria since the protests began.

Syrian state media said Wednesday that Assad has called a referendum for a new constitution that would effectively end nearly five decades of single party rule in the country.