Foreign Ministers of the five Maghreban countries unanimously called for reinvigorating and modernising the structures and action mechanisms of the Arab Maghreb Union (AMU).

Speaking at a press conference on Saturday following the Foreign Ministers meeting of AMU countries in Rabat, Tunisia’s Forein Minister Rafic Abdessalem proposed building on achievements in order to overcome obstackles to the Maghreban union.

Abdessalem, who highlighted the common political willingness to foster the Maghreban action, called for expanding the prerogatives of the AMU’s Foreign Ministers Council and revitalising the mechanisms of consultation between Maghreban states.

Algeria’s Foreign Minister, for his part, underscored that conditions are henceforth propitious for a multi-sectoral cooperation including areas of security.

In this connection, he said that a new meeting of Maghreban Foreign Ministers will be held to define the mechanisms and set objectives sought in their cooperation which will be geared, inter alia, to preserve regional stability and combat terrorism and transborder crime. 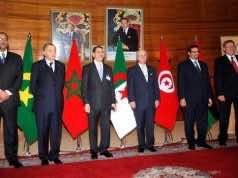 Morocco to Host 7th Summit of Arab Maghreb Union in 2019