The league of Arab States on Monday strongly condemned the statement that appeared on Israel’s PM Benyamin Netanyahu’s Facebook page, in which he reportedly wished death to all Arabs. The statement came after a truck hit the school bus where a group of Palestinian children were riding. The accident resulted in the death of 10 of of them and left 40 wounded.

Mohamed Sabih, Assistant Secretary-General of the Arab League for Palestine and the occupied Arab territories, described Netanyahu’s reported comments as “very serious” and a manifestation of widespread racism in Israel.

“The most dangerous thing is that the Prime Minister of Israel posted these extremely dangerous racist statements and tried to recant, but his aides have kept it”, Sabih was quoted by MAP news agency as saying. “These statements show the extent of the Israeli racism towards the Palestinian people. What is more worrisome is that the culture of racism that prevailed in Israel is going out of control,” he added.

Sabih urged international civil society organizations to take a clear stand on Netanyahu’s hateful statement in order to put an end to this situation that drives extremism and racism and is liable to lead to the escalation of the situation in the Middle East.

The Israeli newspaper Haaretz reported on Monday that  Netanyahu had reportedly wished death to all Arabs, and hoped to send another bus to eliminate them all.

According to Haaretz, Satisfaction that “only Palestinians” were the victims and slogans such as “Death to Arabs, why do we help them? Can we send another truck?” and “I’d send a double-trailer to wipe out all those shits”, were posted on the Facebook pages of Netanyahu, Wallah and the Israel Police. 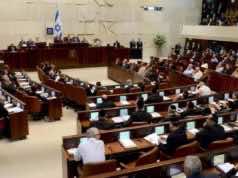