Senior Republican US Senator John McCain said on Wednesday that the world must come to the help of Syrians and stop the “massacre” there as it came to the aid of people of Kosovo and Bosnia.

He also reiterated that Syria’s opposition should be given weapons to defend themselves against President Bashar al-Assad’s forces.

“It is time the massacre is brought to a halt” in Syria, he said.

McCain said it was time to assist the Syrian opposition, which was defending itself from Assad’s forces.

“We should consider every option ranging from sanctuaries to seeing that weapons are brought to the hands of those who are resisting Assad, who are defending themselves,” McCain said, adding that technical and medical help should also be provided to the opposition.

McCain’s made a similar plea in Cairo on Monday.

He again clarified that he was not calling for direct military help from Washington.

“There are many ways in which we can help these people and (to) those who say we can’t identify them, I am confident we can,” he added.

McCain also offered his condolences over the deaths of US reporter Marie Colvin and French photographer Remi Ochlik in the Syrian city of Homs, saying it was a “tragic loss.”

“Unfortunately these are not the first to have given their lives trying to bring to the world the struggles of people for freedom,” he said. 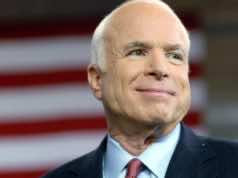 In Memory of John McCain, a Defender of Moroccan POWs’ Freedom