Speaking in court on Wednesday, the final day of ousted leader Hosni Mubarak’s trial, Adly blamed Lebanese Shiite group Hezbollah and Hamas for sending infiltrators to Egypt, and said the “plot” was continuing to this day.

“Hamas did not interfere in Egypt’s internal affairs, either before the revolution or after,” Haniya was quoted as saying in Cairo by Egypt’s official MENA news agency, adding that he “strongly denied” Adly’s accusations.

More than 850 people were killed during 18 days of mass nationwide protests that ended Mubarak’s 30-year rule, and the trial could see the fallen dictator, Adly and six security chiefs hanged if convicted of complicity in their deaths.

The verdict in the landmark trial has been set for June 2.

Hamas, an offshoot of Egypt’s Muslim Brotherhood which was banned under Mubarak, welcomed the anti-regime protests that erupted in January last year and enabled a number of its detained members to escape and return to the Gaza Strip. 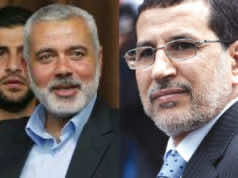