The International Monetary Fund on Thursday described Egypt’s economic situation as dire, sounding the alarm on stagnant growth and a precipitous drop in the country’s foreign reserves.

“Egypt’s economic situation remains challenging. Growth has stalled, and this is hurting the Egyptian economy and the Egyptian people,” said spokesman Gerry Rice.

The IMF is currently in talks with the Egyptian government on a potential loan.

Egypt’s state newspaper Al-Ahram reported Sunday that Finance Minister Mumtaz al-Said said his government would sign a memorandum of understanding with the IMF in March for a previously spurned $3.2 billion loan.

Egypt had turned down the loan last year, saying it did not want to add to its foreign debt, but reconsidered as its economy plummeted.

In January, the head of an IMF mission to Egypt ruled out imposing conditions on Cairo for the loan.

“The discussions with the Egyptian authorities are ongoing, and we stand ready to support a homegrown program that contains the measures necessary to restore confidence and protect vulnerable households,” Rice said. 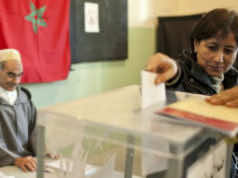