New York - Morocco abounds with young talents, males and females from different fields and ages, who stand out with their ability, their courage, their vision or their contributions to defend their country’s causes and participate in its prosperity. 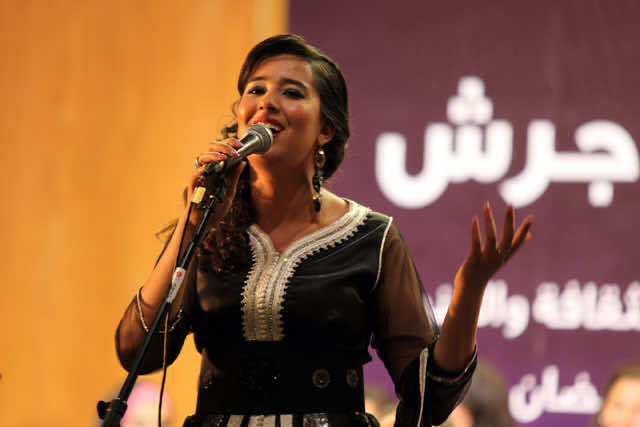 By
Adnane Bennis
-
Adnane Bennis is a national of Morocco, obtained his Bachelor’s Degree in Computer and Information Science from East west University in Chicago.
Mar 2, 2012
Spread the love

New York – Morocco abounds with young talents, males and females from different fields and ages, who stand out with their ability, their courage, their vision or their contributions to defend their country’s causes and participate in its prosperity.

Yet, these young talents, especially artists, still suffer from a poorly structured and still-amateurish artistic sector that doesn’t encourage talented Moroccans to blossom.

Fatine Hilal Bik is a Moroccan artist who combines the beauty of her voice, sharp intellect, and overwhelming charisma that have taken her far in her artistic career.

A graduate of the National School of Business and Management (Ecole Nationale de Commerce et de Gestion, ENCG), Fatine is one of the rare Moroccan artists who has worked across the Arab world, but insists on representing her Moroccanness through the preservation of her Moroccan Arabic language and culture. Thanks to her outstanding and melodious voice, she is considered among the most talented young artists in Morocco. Her motto is to “remain attached to one’s principles and stay true to one’s roots and values.”

Over the past ten years, Fatine has proved that she is a distinguished artist, either in singing, acting or hosting programs. She has participated in various prominent musical festivals and concerts across the country and abroad, among which are the Moroccan Song Festival in Casablanca (2002) and Marrakech (2006 and 2008), and was awarded first prize in all three. She also participated at Jarash Festival in Jordan in 2011, in addition to the Sufi Chanting Festival last year.

Her artistic repertoire includes 11 songs, the most famous of which are “Mouchareba” (Tumultuous) and Kalamak Houb (Your Words are Full of Love). She is also known in the Arab world for being one of the few artists that best interprets Oum Kaltoum and Smahan’s most emblematic songs.

She is the first singer in Morocco to sing about the topic of divorce and the first Arab woman to take part in a sufi concert, which took place in Algiers last October. She was invited to perform by the renowned Iraqi musician and oud player Nasser Chamma, who insisted that she take part in the concert.

Fatine was also nominated to participate at Mawazin Festival last May, but due to the indifference of the Moroccans in charge of such festivals towards Moroccan artists, she decided to decline the offer. While other foreign artists who are not necessarily well-known in their countries, and whose credentials are still not established, perform in the main stage of the festival and earn big checks, Moroccan artists barely receive any attention from organizers and are often offered secondary roles. “Unfortunately, in our beloved Morocco, Moroccan artists are usually relegated to the margins to perform on small stages with poor compensation, while foreign artists are offered the chance to perform on the main stages in exchange for millions of dollars,” Fatine says.

Fatine’s new experience in acting started with the controversial Gulf soap-opera “Karima” that was broadcasted last Ramadan across many Arabic TV channels, such as Abou Dabi, Drama and MBC. Her role is of a Moroccan singer who works in the Gulf to support herself and her family in Morocco. Fatine sees her participation in this series as an attempt to raise awareness and sensitize people about the distorted image of Moroccan women in Gulf countries through a realistic dramatic story.

As a professional and well-recognized singer, Fatine Hilal has also successfully stepped into the world of television host. She hosted the following programs on Moroccan national TV: “al-Kalam al-Mawzoun,” “al-Khalidat” and “Hafl Khas,” which honored some of the great Arab artists, such as Abdel Hadi Belkhiyat, Fath Allah Lemghari, Abdelwahab Doukkali and Walid Taoufiq.

An artist committed to the causes of her country

Away from her artistic projects and successes, Fatine Hilal Bik is an advocate for the causes of the have-nots and she is committed to the defense of her country’s interests.

She represented Morocco in the National Arab Youth Meeting in 2005, which included representatives from 11 Arab countries. It was a landmark event attended also by the then President of Lebanon, Emil Lahoud, and a large number of Arab intellectuals and politicians.

During that event, she delivered an impassioned speech about the Palestinian cause, pleaded for Arab unity and defended the legitimacy of the Moroccan Sahara. She can be distinguished from many of her counterparts by her eagerness to promote Morocco’s image.

Besides her outstanding talent, what makes the profile of Fatine more impressive is her interest in the role being played by Moroccans living abroad towards the country’s democratic, economic and political development, as well as her willingness to be involved in this endeavor.

In this regard, Fatine is planning to carry out a tour to the United States next summer. Through her trip she intends to achieve two goals: perform for and introduce herself to the Moroccan community in the U.S and also defend the position of Morocco on the issue of the Sahara.

Fluent in English and well-acquainted with the media landscape in the US, she feels that “Morocco can gain more sympathizers with its position among Americans, provided that Moroccans from all walks of life vigorously participate in lobbying for the cause of their country.”

“Whenever I talk to Americans about Morocco and the Sahara, in particular, I feel that our country is still not well-known among the American public, who have a picturesque image of our country and I get the sense that more should be done in terms of public opinion and the promotion of Morocco’s image among the American people. As an artist and a citizen proud of my country, I want to play my part in promoting its image,” she said.

“Wherever I go, I feel the responsibility to represent my country in the best possible way and also defend its causes, especially its territorial integrity. I will spare no efforts to counterbalance the propaganda being spread by our country’s enemies and defend the Moroccanness of the Sahara,” she added.

Fatine firmly believes that “for the good of our country, we don’t have to always wait for the government to do things for us. As citizens, we also have to stand up, and work hard for a better and prosperous Morocco in whichever capacity we can.”

In line with her strong belief in the difference that the action of individuals can make in the life of others, Fatine intends to be increasingly involved in charitable activities. After she visited a children’s hospital along with some friends, Fatine launched an organization called “Mama Khadija”. Named after her mother who passed away last November, the association aims at providing help and assistance to children suffering from chronic diseases, as well as those who come from underprivileged families.

“For me, an artist has a noble mission to carry out in society.  His or her role should not only be limited to entertaining people, but to be involved with them in their pains and problems, and to advocate for their causes. A true artist must have the sensitivity to feel for others, to understand them and live up to their expectations. My goal after my songs and my work is to raise awareness among people, to positively influence each other and to safeguard the human values that represent the backbone of our society.”