Russia has no intention of curtailing military cooperation with Syria despite calls from the West to stop arming President Bashar Assad’s regime, a senior Russian government official said Tuesday.

Deputy Defense Minister Anatoly Antonov said Russia will abide by existing contracts to deliver weapons to Syria despite Assad’s yearlong crackdown on the opposition, in which over 7,500 people have been killed.

“Russia enjoys good and strong military technical cooperation with Syria, and we see no reason today to reconsider it,” Antonov told reporters.

Russia has shielded Syria, its last ally in the Arab world, from U.N. sanctions over the Assad regime’s bloody suppression of an uprising against his government.

Moscow has been a steadfast ally of Syria since Soviet times, when the Middle Eastern nation was led by the current president’s father, Hafez Assad, and has long supplied Damascus with aircraft, missiles, tanks and other heavy weapons.

The Syrian port of Tartus is now the only naval base Russia has outside the former Soviet Union. A Russian navy squadron made a call there in January in what was seen by many as a show of support for Assad.

Also in January, a Russian ship allegedly carrying tons of munitions made a dash for Syria after telling officials in EU member Cyprus, where it had made an unexpected stop, that it was heading for Turkey. Turkish officials said the ship had instead charted course for Tartus.

Antonov said Russia’s supply of weapons to Syria is in line with international law and will continue. “Russian-Syrian military cooperation is perfectly legitimate,” he said.

“The only thing that worries us today is the security of our citizens,” Antonov said in a reference to Russian military personnel in Syria that are training the Syrians in the use of weapons supplied by Russia.

He declined to say how many of them are currently stationed in Syria.

“It’s part of our contractual obligations,” said Antonov, who oversees military technical cooperation with foreign countries. “When we supply weapons, we have to provide training.”

“There are no (Russian) special forces with rifles and grenade launchers running around,” he said. 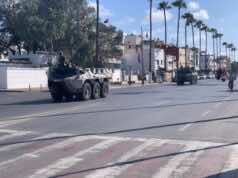 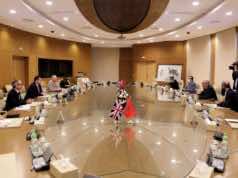