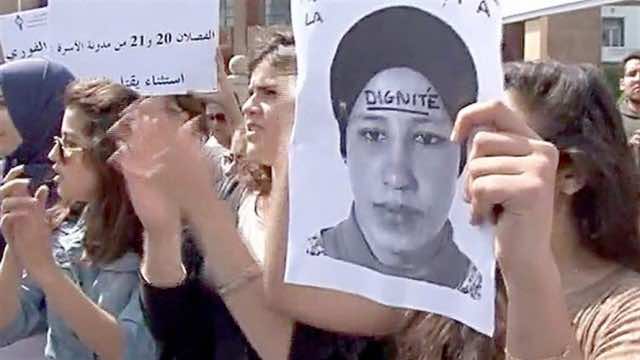 Fez – Today is a day of sorrow, today we stand all upon the grave of humanity. Picture humanity as a man struggling to move forward, but his legs keep moving while his hands and head are held back towards the opposite direction, chained to a wall he cannot beat.

Screaming in an attempt to be heard, walking with his swollen feet dipped in thick water. Until he gives up and surrenders to death.

I am here today to say words Amina didn’t have enough time to say. I am here to scream with a louder voice, I am here to condemn the crime committed by society against that innocent soul. For those of you who are wondering who this Amina might be, I am here to tell you her tale.

In the small northern city of Larache lived a 15 years old little girl. One day, one sad, murky miserable day, probably while walking the streets of her town, or just running to get some groceries, no one really knows, a man who goes by the name of Mustafa filled with animosity and cruelty, enough to have no morals whatsoever… raped the little girl. However, this is not a typical rape story as they happen daily throughout the universe.

Let apart the emotional damage, the despair she must have felt, Amina and her mother had enough guts to go seek justice, against the corrupted morals of the town’s men, including her own father.

Sadly enough, life is no fairytale, at least not in Morocco. Justice (Ô Justice!) has sentenced, and I am using that word right, the little girl to a life imprisonment with her rapist, against her own will by obliging her to marry him. All for a diaphanous sense of family honor. Agreed on by the court house, the family house and the mental house.

Door after door kept slamming at the poor kid’s face, including the one of her own home. Beaten up by a husband that clearly appears as psychopath, mistreated by his people and rejected by her own. Our little Amina saw no light, found no other door to knock. At the age of 16, (sweet sixteen) Amina poisoned herself to death.

Reading her story today, the world stopped spinning around me, no sun light could penetrate my corroded soul, no comforting words could appease the woes I was feeling. How could one be so monstrous? In an era when we only hear shouts defending human rights, papers standing up for children and women, presidential speeches and promises that guarantee a life with dignity as a major aspect!

We all knew there was no fragment of truth in that, but we relentlessly seek something to believe in, that often we end up thinking that their words are holy revelations. Until of course , the day like today when we face the unbearable truth that we are more holy that they could ever be , and that they are very keen , shrewd people.

But then again, who to blame? A corrupted system we all knew of, but kept silent. A specie we belong to, but never represented; or a society we built, but lost control of. Amina’s death is only one tiny aspect of the crimes we commit every day. Standing there silent where such things happen daily in front of our eyes, around our families and kids is no less than accessory to murder.

Treating a rape victim, a minor, an innocent soul as a harlot is our court’s house latest prowess. Many people condemn the Islamic way of dealing with crimes (Al Houdoud), referring to it as criminal, monstrous, staggering. Henceforth, to them, it is not worthy of the 21st century.

I have never been one of those people. I strongly believe that if we applied the Muslim justice rules, which many people do not know the details of nor the conditions under which they are applied, I will not be here witnessing this dismal reality.

How could anyone approve of such an unfathomable judgment, just a few days after the celebration of women throughout the country? Hypocrites, that is who we are; we celebrate merrily the Moroccan exception and act blind to its numerous flaws.

Bouazizi might have started a political revolution; But Amina has triggered the awakening of the long sleeping humanitarian in me. Thousands of girls like her are spread above our ground, most of them silenced by force and threat. While you guys are centered in finding Joseph Kony in the deep forests of Uganda, your kids are being stolen from you in your own land.

I can sit here all day haranguing my despair, sobbing the death of what one day could be my daughter or my friend, but it won’t change much. If we do not do this together, if we don’t strife hard to change this Moroccan mentality we are being trapped in, we will not reach far.

It is good to bow in silence of our lost souls, but it is better to object louder the reason behind their loss. I have never seen Amina, nor do I know what she looks like. However, I ask the Almighty in reverence, the merciful to forgive her, if she sinned and accept her in His promised heaven.

Mehdi Bourakkadi Idrissi, is a student at the Faculty of Medicine of Fez-Morocco. Co-founder and member of the directing Committee of the NGO Teach4Morocco. He is interested in education, sports, social media, religions and politics.