Egypt’s Coptic Orthodox church began preparations on Sunday for the funeral of Pope Shenuda III, who died on Saturday aged 88 after a long battle with illness.

Based on wishes stated in his will, Shenuda will be buried at the St.

Bishoy monastery in Wadi Natrun in the Nile Delta, where he spent his time in exile after a dispute with late president Anwar Sadat, state media reported.

Shenuda will be dressed in formal robes and laid in an open coffin in Cairo’s St. Mark’s Cathedral until the funeral on Tuesday, the state-owned daily Al-Akhbar reported.

Bishop Pachomious of the Nile Delta province of Beheira has taken over papal duties for two months until a council of senior clergy meet to choose a new pope, state television said.

Coptic Bishops from around the world have already started to fly in to attend meetings over the funeral and plan for Shenuda’s succession.

The spiritual leader of the Middle East’s largest Christian minority had suffered health problems for years, travelling to the United States frequently for treatment.

Recently he stopped receiving treatment for liver failure and tumours or swellings in his lungs because he was too feeble, the Coptic Church said.

He leaves behind a nervous community, a target of frequent sectarian attacks in recent years, who complain of routine harassment and systematic discrimination.

Egypt’s Christians are particularly concerned over the rise and increased assertiveness of Islamists, following an uprising that toppled president Hosni Mubarak. 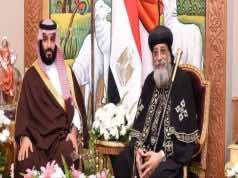