Iran ushered in its Persian New Year on Tuesday with a symbolic cannon blast from its flagship destroyer, and speeches from leaders vowing to fix an economy suffering under Western sanctions.

The shell shot from the warship Jamaran and the speeches, broadcast on state television, underlined the defiance of Iran as it confronts the West in a hardening showdown over its controversial nuclear program.

If Iran boosts its economy, “the enemy (the West) will despair and its efforts to plot and conspire against us will end,” supreme leader Ayatollah Ali Khamenei said.

He declared the aim of the next 12 months to be “domestic production and the support of Iranian investment and labor” with a buy-Iranian campaign.

The previous 12 months, he said, displayed Iran’s progress in nuclear research as well as other fields, he said.

“Despite all the animosity, all the propaganda, all the hostile attacks and ill-wishes, the Iranian nation last year was able to show its innovation and readiness in all aspects of scientific, social, political and economic endeavors,” he said.

There were also a lot of events in the Middle East, such as the fall of Arab dictators and rise of Islamic governments, Khamenei said.

“That turned out to favor the Iranian nation” and “dealt many problems to the West,” he asserted.

“The number one enemy to Iran and the Islamic world, the Zionist regime (Israel), is surrounded,” Khamenei added.

Iran’s calendar year runs starts mid-March each year, with the new year ? Nowrouz ? marks the transition from winter to spring.

“My government stands by all Iranians, in good times and in bad,” he said.

Iran’s economy, which has long suffered high inflation and unemployment, has been recently further buffeted by increasingly severe U.S. and EU sanctions against its vital oil and financial sectors.

Iran was last week was kicked out of a global banking communications network, the Belgian-based SWIFT system.

Other sanctions are limiting its ability to export and reap revenues from its oil production.

Iranian leaders have started admitting the sanctions are hurting, but have pledged to resist them.

They say the pressure will not force them to make concessions on their nuclear activities, which they insist are for purely peaceful purposes.

The United States and its allies believe the program masks a drive to develop nuclear weapons capability.

Israel, which fears an Iranian bomb could threaten its very existence and topple its monopoly as the Middle East’s sole if undeclared nuclear power, has threatened possible military strikes against Iranian nuclear facilities.

Iran last month agreed to the principle of resuming talks with the five permanent U.N. Security Council members plus Germany ? the so-called P5+1 group ? but no venue or date for the negotiations has yet been announced.

The last round of talks collapsed in Istanbul in January 2011. 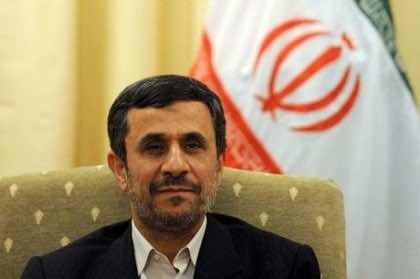