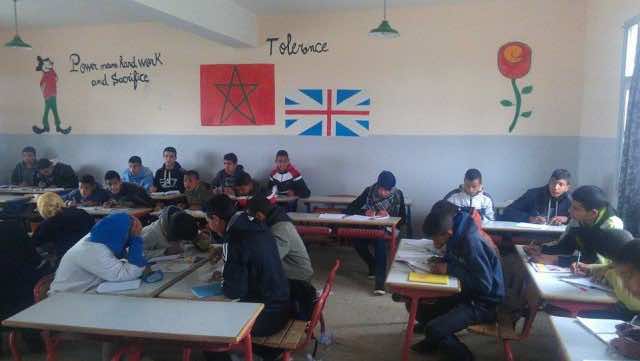 Kenitra – Books written in English have become like grains of sand; one could hardly count them. This is so, simply because this language has become the most dominant language worldwide.

Wherever we go, at airports, international conferences/meetings, important universal institutions…, we hear it. As such, a lot of researchers from every spot in the world have been trying to write in English: a German or French scientist, for instance, would have to write his/her work (a research) in English if he/she wanted to ensure a rapid spread thereof.

In this respect, being a Moroccan speaking English and teaching it, I have remarked that Moroccans are not as keen on writing in English as most Europeans are. Very few Moroccan intellectuals, writers and academicians write in English; this is due to the influence of French, for Morocco is a Francophone country par excellence.

Moroccan academicians and writers hardly write in English. I very rarely hear about or read a work of literature, be it fiction or non-fiction, written by a Moroccan writer. Apart from Leila Alami, who is by far the most known Moroccan writer and academician producing in this language, I do not know any other eminent names.

Of course, there are other people having rather modest attempts, but broadly speaking English works by Moroccan people are rather few. I should, indeed, mention Jilali Koudia, a short story writer; Fatima Sadiqi and Mouha Naji, two eminent Moroccan linguists and Nasser Berjaoui, another linguist and teacher.

What, indeed, pushed me to write this article is that I am a graduate of the English department and have been taught by good teachers who can produce in English without pain, as it were. Still, they do not; incidentally, Moroccan university teachers do not produce much — in all languages– if compared to their American or European peers, and I can surmise this just from the teachers who taught me.

Before majoring in English, I had expected that Moroccan university teachers in English departments wrote in English, but I was really shocked to learn that I had been mistaken. I would accept that teachers in the Arabic, history/geography, philosophy and French departments, for example, do not write in English, because English is not their specialty, and because most of them speak French beside Arabic.

A mathematics or physics teacher would say, “Why should I write in English? It’s not my specialty,” knowing that it has almost become obligatory for exact sciences teachers, in particular, to translate their works into English to make them accessible by other researchers/students from other countries.

Again, I will go back to Moroccan university English teachers: should not they write in English to contribute to the development of their fields of study? Should not they wow the world like other writers by their novels, short story collections, articles and so forth? Actually, I have never come across a grammar book (completely) written by a Moroccan teacher; one would argue, “Why should they do it?” I would say, “Why should not they do it?” They could do it, as do the Orientalists with Arabic.

Also, if we should look at a teacher as a model, he/she should have some works that would reflect his/her capacities — writing skills. I would put a lot of blame on English teachers (at university), because they must normally write researches, journals, reviews, to name but a few. For instance, how can a teacher teach you composition and prescribe what is good and bad with regard to writing, while he/she him/herself has never written a book in English, of course, apart from his/her PH.D thesis.

Even at the journalistic level, there has been just one famous Moroccan paper in English– The Casablanca Analysts—, which was run by Bouchaib El Idrissi, but it did not live long for want of funding, contribution of Moroccan writers, readership, among others. Some people, including writers, have argued that Morocco is a Francophone country, and there is no large readership of English, which I do not find a plausible excuse.

French has been a haven for Moroccan teachers and Academicians to dodge writing in English. The majority of teachers say that a large portion of Moroccans is illiterate, and the minority that can be called “educated” master French beside Arabic, which is a big hurdle between Moroccan teachers or thinkers that can produce in English and readers.

Personally, I have heard this excuse many times. Also, some people refer to the lucrative problem: they say they would not sell their books for the want of readers of English. I cannot say that I do not understand their motives; namely, the lucrative ones, yet I find them rather flimsy.

If I am keen on writing in English, I will surely do it and publish my works abroad, not to mention that producing English books, regardless of their genres, would familiarize Moroccans speaking and reading English with them. In this respect, the number of people mastering English has been increasing apace, for, as I mentioned earlier, this language has imposed itself in a very strange way. On the other hand, even if French is the second official language nationwide, it no longer has that power, for ironically the French themselves hold meetings and seminars — in France– in English, which shows that this latter has become a powerful language.

I am not saying this because I am weak at French; praise be to God, I am quite good at it. In other words, writing in English should be considered quite normal today; namely, in those working in it.Actually, were Moroccans writing in English, their culture would spread quickly; they also would contribute to the development of science.

I am quite sure that the Americans or British hardly know about any Moroccan academician writing in English, except for Leila Alami and maybe one of the scholars mentioned above, which is far from being enough, and I wish such a situation would change.

Soon or later, Moroccan researchers, intellectuals, teachers…will have to make of English an important channel between them and the rest of the world. Simply put, writing in English must become a normal act within the Moroccan academic sphere. As for our Moroccan English teachers, It is high time they started producing in English and invested their knowledge in this language. After all,

I cannot but feel sorry, as I love English and think of doing my career therein, as a researcher and teacher. Also, I hope that the readers of this article do not think that I am biased against French: this latter will always remain a major component—I myself will write in it whenever I feel it is necessary-of academic/educational work in Morocco, for it has almost become part of the Moroccans’ identity. Still, I insist that English be given the value it deserves within the intellectual and academic area in our country.

Koulila Brahim is a Moroccan English teacher and essayist. He lives in Kénitra, Morocco, and he working at Mohamed V Univ, Agdal, Rabat. He obtained his M.A. (Studies in English language and culture) at Ibn Tofail University, Kénitra (Morocco) in 2010.  He is interested  in what is going on in Morocco, namely at the political and social levels.