The International Federation for world soccer (FIFA) may overrule its five-year ban on women wearing a hijab on the playing field, if a new football friendly hijab design from “Capsters” gets approved at a meeting in London in July. 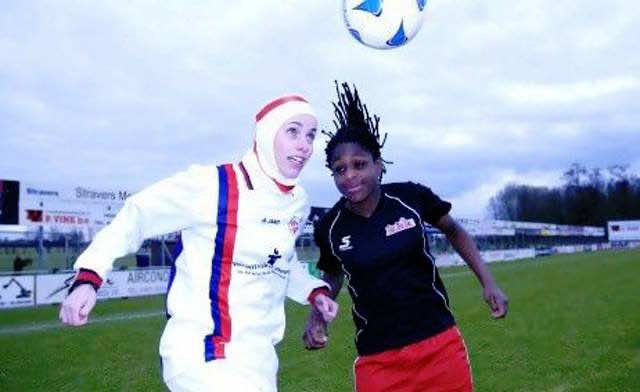 The International Federation for world soccer (FIFA) may overrule its five-year ban on women wearing a hijab on the playing field, if a new football friendly hijab design from “Capsters” gets approved at a meeting in London in July.

The International Football Association Board (IFAB) of which FIFA is a major member, has agreed to allow women to wear the hijab as a trial after athletes of both Muslim and non-Muslim arrived at the March 3 London meeting of the (IFAB) with a proposal to lift the ban and allow thousands of women an opportunity that is blocked under current rules.

“Capsters” sports friendly hijab which is basically a plastic wrapper of white fabric of the size of a large handkerchief with some stitching and a bit of Velcro, may give many Muslim women a shot at playing competitive football without danger of disqualification.

Cindy van den Bremen, a Dutch designer told Rotterdam News in an interview last week: “In the West, there is so much connected to this piece of fabric that it is not fair anymore.” The fabric piece that she refers to is the hijab, a topic that Van den Bremen, a non-Muslim, has been engaged in since creating a sports hijab design 12 years ago as a graduating project at the design academy in Eindhoven.

The design enfolds velcro strips which are used for fastening the hijab safely – so it comes off when pulled. The Capsters design echoes the burqini, an Australian designed swimsuit that has been widely acceptable by Muslim communities.

IFAB issued an statement last year to ban scarves worn around the neck, including the hijab, saying they posed a possible choking threat. Yet, it allowed head coverings that followed the hairline, such as caps, but not below the ears and not covering the neck

Many critics outside the Muslim world have been speaking in favor of allowing athletes to wear the hijab during the game. The United Nations stood against the ban when an adviser to Secretary-General, Ban Ki-moon, called for all women to play without discrimination in February.

The veil ban followed a 2007 rule stating that players’ outfits should not carry any political, religious or personal statements.

The issue sparked global interest in June 2011, after the Iranian women’s team was forced to forfeit its Olympics qualification game against Jordan because the players were wearing the hijab.

Prince Ali Bin Al Hussein, who was elected as vice-president for Asia of Fifa and witnessed the incident has been a force for change.

In November 2011, in Kuala Lumpur, Malaysia, the proposal to end the hijab ban was approved by the executive committee of the Asia Football Confederation (AFC). He has also followed that with a presentation to IFAB this month to overturn the ban. “We will work together to find a solution that respects the rules of the game and the culture at the same time,” he said shortly after the Iran-Jordan match on 2011.

The Capsters design was introduced to Jordan’s national football team by its Dutch coach, even though only some of the team’s players wear the hijab. The FIFA’s medical committee is currently examining the design and Mrs Van den Bremen is counting on being involved.

“Hopefully and most likely we will be part of the committee because we designed it and the main reason for this is to get a hijab solution, not to disallow it,” she told the National on Tuesday.

Bremen believes that a reversal of the hijab ban by FIFA should certainly give more young women worldwide an opportunity to be engage in sport games professionally.